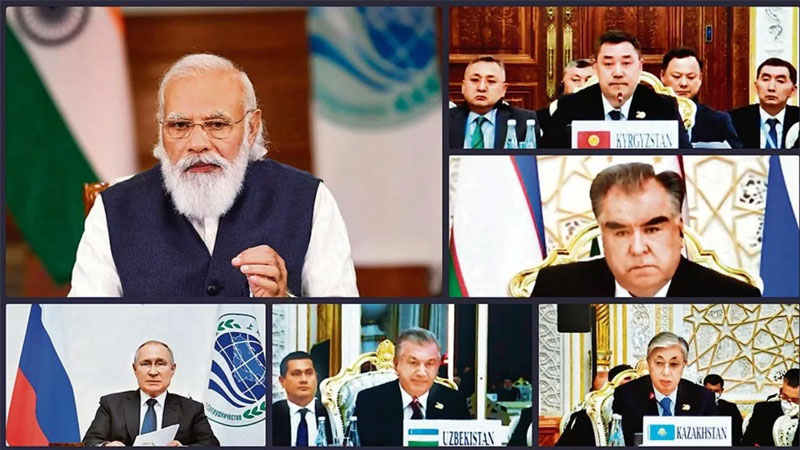 Prime Minister Shri Narendra Modi participated virtually in the 21st Meeting of the Council of Heads of State of the Shanghai Cooperation Organisation (SCO), and through video-message in the Joint SCO-CSTO Outreach Session on Afghanistan. The 21st meeting of the SCO Council of Heads of State was held on 17 September 2021 in Dushanbe in hybrid format. The meeting was chaired by H.E. Emomali Rahmon, the President of Tajikistan. Prime Minister Shri Narendra Modi addressed the Summit via video-link. At Dushanbe, India was represented by External Affairs Minister, Dr. S. Jaishankar. In his address, Prime Minister highlighted the problems caused by growing radicalisation and extremism in the broader SCO region, which runs counter to the history of the region as a bastion of moderate and progressive cultures and values. The text of the speech is as follows:

Excellencies,
At the outset, let me congratulate President Rahmon on his successful Presidency of the SCO Council. This year we are also celebrating the 20th anniversary of SCO. The 20th anniversary of the SCO is also a suitable occasion to think about the future of the SCO.I believe that the biggest challenges in this area are related to peace, security and trust-deficit and the root cause of these problems is increasing radicalization. Recent developments in Afghanistan have made this challenge more apparent. SCO should take an initiative on this issue.

The recent developments in Afghanistan will have the greatest impact on neighboring countries like us. And, that is why it is necessary to create a regional focus and cooperation on this issue. In this context, we have to pay attention to four issues.

The first issue is that the transition of power in Afghanistan is not inclusive, and it has happened without negotiation.

The second is that, if instability and fundamentalism persist in Afghanistan, it will encourage terrorist and extremist ideologies all over the world.

The third issue related to developments in Afghanistan is the uncontrolled flow of drugs, illegal weapons and human trafficking.

The fourth issue is the serious humanitarian crisis in Afghanistan.

In India, and almost in all SCO countries, there are moderate, tolerant and inclusive institutions and traditions associated with Islam. SCO should work to develop a strong network between them. In this context, I appreciate the useful work being done by SCO-RATS. We expect our SCO partners to actively participate in the calendar of activities that has been built for India’s Presidency of SCO-RATS.
Fighting radicalization is not only necessary for regional security and mutual trust, but it is also necessary for the bright future of our younger generations. To compete with the developed world, our region has to become a stakeholder in emerging technologies. For this we have to encourage our talented youth towards science and rational thinking.

We can promote this kind of thinking and innovative spirit by connecting our young entrepreneurs and start-ups. With this approach, India organized the first SCO Start-Up Forum and Young Scientists Conference last year. In the previous years, India has successfully used technology in its development journey.
One of the main reasons for the success of SCO is that its core focus has been on the priorities of the region.

My suggestions on radicalization, connectivity and people-to-people relations will further strengthen this role of SCO. Before I conclude, let me once again thank our host, President Rahmon.