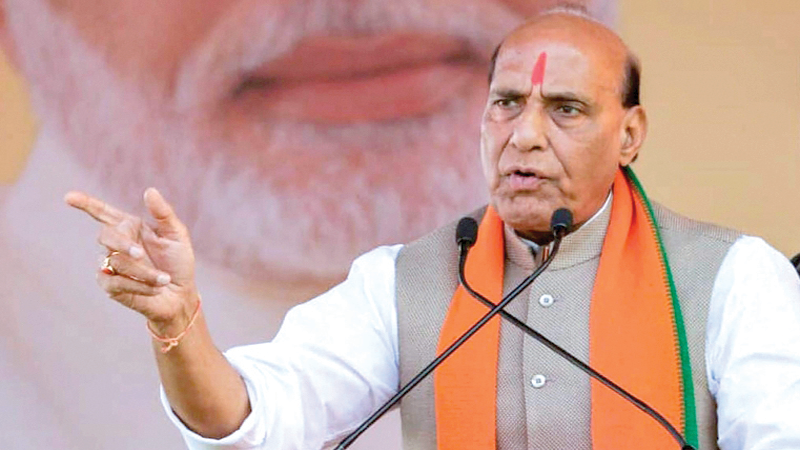 The Union Home Minister Shri Rajnath Singh has said the Internal Security situation in the country has vastly improved, particularly in the North-East and the LWE affected States. Addressing the Inaugural Session of the Conference of Director Generals and Inspector Generals of Police at Kevadiya in Narmada district of Gujarat, Shri Rajnath Singh noted with satisfaction the improving security scenario in the North-East, particularly the peaceful rollout of NRC in Assam including publication of the final draft NRC list on July 30, 2018.

“Security scenario in the North-East region has witnessed steady improvement in recent years. All parameters of violence have improved in 2018 in comparison to corresponding period of 2017. There is 17% decline in total incidents and 38% reduction in the casualties of civilians,” said Shri Rajnath Singh. “AFSPA was selectively relaxed in Arunachal Pradesh and Meghalaya, inviting positive public response. Besides, to encourage the militants to join the mainstream, GoI has revised the Surrender-Cum-Rehabilitation Policy by enhancing financial benefits to the surrendering militants,” he added.

The Union Home Minister said India’s security concerns have been conveyed to Myanmar even as efforts are on to harness the trade potential with the Eastern neighbour and beyond. “A number of our militant groups are operating from the territories of neighbouring countries, particularly Myanmar. Our concerns have been highlighted in the bilateral meetings with these countries. In order to plug the gaps on the Indo-Myanmar border, an Inter-Ministerial Committee headed by MHA has formulated a revised protocol for effective implementation of Free Movement Regime.”

Shri Rajnath Singh said violence in the LWE affected areas continues to improve since the last eight years. “We achieved major operational successes in core areas of CPI/Maoist in Chhattisgarh, Jharkhand and Odisha. Coordination among different State Police Forces and CAPFs, and generation of regular actionable intelligence was among the main factors which led to an almost two-fold increase in the losses suffered by LWEs this year.” “Reflecting on these successes and the upper hand of the government over the Maoists, after a comprehensive review the number of districts covered under SRE scheme were reduced from 126 to 90,” he added.

The Union Home Minister said the communal situation has also remained under control this year to date. “The communal situation during the current year remained under control, with a decrease of 12% in communal incidents as compared to the corresponding period in 2017,” said Shri Rajnath Singh. “Misuse of Social Media for religious denigration also witnessed a significant decline during this year,” he added.

Shri Rajnath Singh said terrorism in the hinterland has also been stamped out. “Law enforcement agencies, through concerted action coordinated by Intelligence Bureau, have managed to overcome the first tide of propaganda and mobilization by Islamic State in Iraq and Syria. Consequently, India witnessed very few incidents of IS inspired violence. In concerted counter-terrorism operations, Law enforcement agencies have arrested nearly 125 terrorist suspects as against 117 arrested in 2017,” said Shri Rajnath Singh. “The new phase of Islamic State propaganda emanating from Afghanistan-Pakistan region is also being countered effectively,” he added.