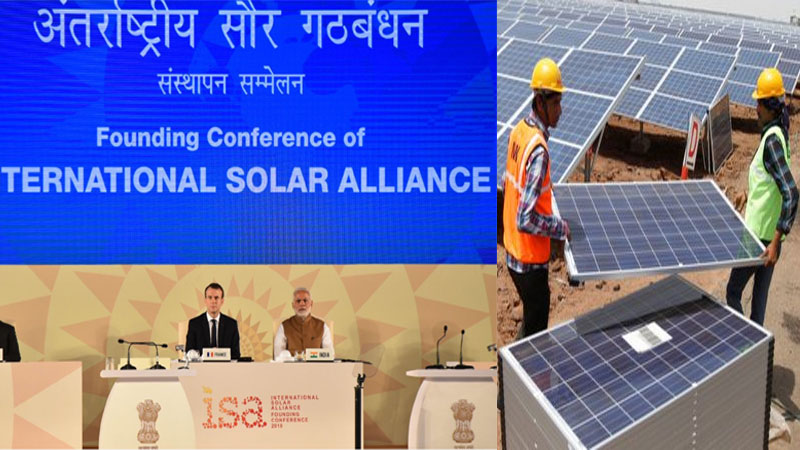 In a significant development at the COP-26 Glasgow climate summit, in November 2021, the United States of America joined the India-led International Solar Alliance (ISA) as its 101st member country, when US Special Presidential Envoy for Climate Mr. John Kerry signed the ISA framework agreement to catalyse global energy transition through a solar-led approach.

During the same Glasgow summit the International Solar Alliance and the UN Framework Convention on Climate Change (UNFCCC) also signed a memorandum of understanding agreeing to collaborate and support countries in the implementation of ambitious national climate action in line with global efforts. Both the global institutions now jointly organise a set of activities to facilitate the implementation of mitigation action in the energy sector, facilitate the implementation of Nationally Determined Contributions and Long-term Low Emission Development Strategies. The agreement carries importance as it will lend support to developing countries, including Small Island Nations and Least Developed Countries, in accelerating the adoption of policy options and approaches for decarbonisation technologies.

“India as a responsible nation is leading from the front under the visionary leadership of PM Shri Narendra Modi by offering the world more than what it was expecting. In that direction International Solar Alliance (ISA), as Prime Minister Shri Narendra Modi called is India’s true “gift to the world”

Similarly, crossing an important milestone just on the eve of COP-26 Glasgow summit, the International Solar Alliance got the Observer Status from UN General Assembly Sixth Committee. It is not only symbolic, but a substantive one. Adoption of the India’s resolution will certainly usher a new era of green energy diplomacy.
These recent developments not only establishes ISA as a global institution, which leads from the front on solar and works to achieve emission reduction by deploying solar energy but also expedites the global response against climate challenges. Undoubtedly, these collaborations with ISA and recent joining of Israel, Greece, United States and 100 plus member countries will surely bring long-term, cost effective and impactful solutions, for clean energy and climate challenges.

With countries now coming together on various global stages to slow global warming with substantial action, India as a responsible nation is leading from the front under the visionary leadership of PM Shri Narendra Modi by offering the world more than what it was expecting. In that direction International Solar Alliance (ISA), as Prime Minister Shri Narendra Modi called is India’s true “gift to the world” in the fight against climate change.

India, which is relentlessly working to improve the Ease of Living for millions of people, and responsible for 5 percent global emissions, despite having 17 percent of the world’s population, has left no stone unturned to show that it has fulfilled its obligations. Today, the whole world believes that India is the only big economy which has delivered in letter and spirit on the Paris Commitment.

Undoubtedly India is ‘doing more’ to save the planet, by aggressively promoting renewable energy. Five years ago, India had just 3 GW solar energy installations however; Prime Minister Narendra Modi had set an ambitious goal of building 175 gigawatts of renewable energy capacity by 2022, including 100 gigawatts of solar and it is making every effort with determination to achieve this target.

Every year more passengers travel by Indian Railways than the population of the world. This huge railway system has set a target of making itself ‘Net Zero’ by 2030. This initiative alone will lead to a reduction of emissions by 60 million tonnes annually. Similarly, the massive LED bulb campaign is reducing emissions by 40 million tonnes annually. Today, India is working at a faster pace on many such initiatives with a strong will.

As a revolutionary step in solar power, India initiated the International Solar Alliance because for many developing countries, climate change is looming large over their existence. This is a sensitive and vital initiative of India to save millions of lives. This is the need of the hour and ISA is proving its relevancy. As expected, ISA helps India in moving forward on the subject of climate with great courage and great ambition. It can certainly play a vital role in the development of clean sustainable energy for the earth and will save the future of our future generations, giving them the gift of a secure and prosperous life.