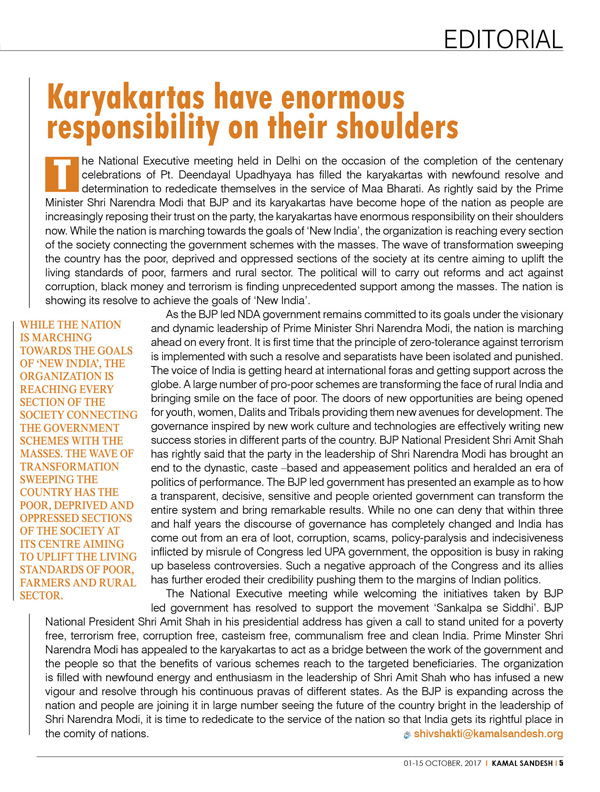 The National Executive meeting held in Delhi on the occasion of the completion of the centenary celebrations of Pt. Deendayal Upadhyaya has filled the karyakartas with newfound resolve and determination to rededicate themselves in the service of Maa Bharati. As rightly said by the Prime Minister Shri Narendra Modi that BJP and its karyakartas have become hope of the nation as people are increasingly reposing their trust on the party, the karyakartas have enormous responsibility on their shoulders now. While the nation is marching towards the goals of ‘New India’, the organization is reaching every section of the society connecting the government schemes with the masses. The wave of transformation sweeping the country has the poor, deprived and oppressed sections of the society at its centre aiming to uplift the living standards of poor, farmers and rural sector. The political will to carry out reforms and act against corruption, black money and terrorism is finding unprecedented support among the masses. The nation is showing its resolve to achieve the goals of ‘New India’.

As the BJP led NDA government remains committed to its goals under the visionary and dynamic leadership of Prime Minister Shri Narendra Modi, the nation is marching ahead on every front. It is first time that the principle of zero-tolerance against terrorism is implemented with such a resolve and separatists have been isolated and punished. The voice of India is getting heard at international foras and getting support across the globe. A large number of pro-poor schemes are transforming the face of rural India and bringing smile on the face of poor. The doors of new opportunities are being opened for youth, women, Dalits and Tribals providing them new avenues for development. The governance inspired by new work culture and technologies are effectively writing new success stories in different parts of the country. BJP National President Shri Amit Shah has rightly said that the party in the leadership of Shri Narendra Modi has brought an end to the dynastic, caste –based and appeasement politics and heralded an era of politics of performance. The BJP led government has presented an example as to how a transparent, decisive, sensitive and people oriented government can transform the entire system and bring remarkable results. While no one can deny that within three and half years the discourse of governance has completely changed and India has come out from an era of loot, corruption, scams, policy-paralysis and indecisiveness inflicted by misrule of Congress led UPA government, the opposition is busy in raking up baseless controversies. Such a negative approach of the Congress and its allies has further eroded their credibility pushing them to the margins of Indian politics.

The National Executive meeting while welcoming the initiatives taken by BJP led government has resolved to support the movement ‘Sankalpa se Siddhi’. BJP National President Shri Amit Shah in his presidential address has given a call to stand united for a poverty free, terrorism free, corruption free, casteism free, communalism free and clean India. Prime Minster Shri Narendra Modi has appealed to the karyakartas to act as a bridge between the work of the government and the people so that the benefits of various schemes reach to the targeted beneficiaries. The organization is filled with newfound energy and enthusiasm in the leadership of Shri Amit Shah who has infused a new vigour and resolve through his continuous pravas of different states. As the BJP is expanding across the nation and people are joining it in large number seeing the future of the country bright in the leadership of Shri Narendra Modi, it is time to rededicate to the service of the nation so that India gets its rightful place in the comity of nations. shivshakti@kamalsandesh.org