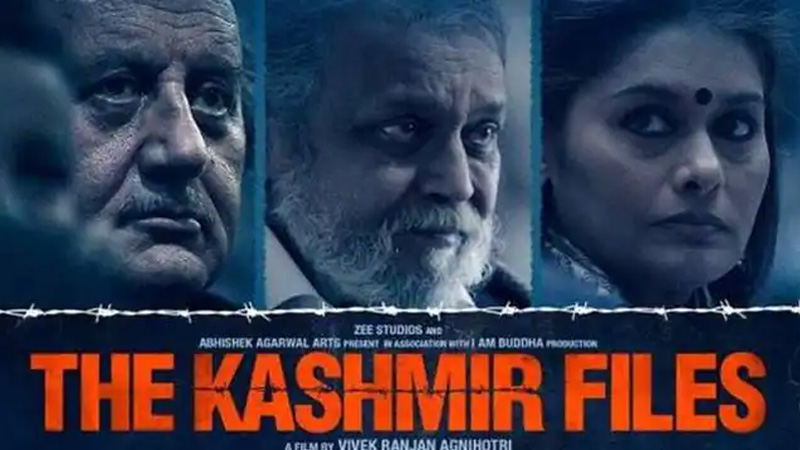 Kashmir Files, the movie has been witnessing phenomenal success with packed halls across the country and creating new records with each passing day. However, the success of a movie like Kashmir Files should not be judged only based on the box office numbers. The unprecedented embracement of the movie by the general public, in spite of the absence of any big stars and sparse endorsement by the Bollywood fraternity, is a testimony to the fact that content is still king in India’s mainstream movie industry. This movie has also been different on many other counts. For example, unlike previous movies on Kashmir, this is the only one which has dared to face the blunt truth of the Kashmiri Pandits’ plight of genocide and ethnic cleansing and not sugar coat it in the form of of love stories. Secondly, the movie is a welcome departure from the twisted narrative that is often peddled through Bollywood movies as a part of the deep conspiracy to infuse a certain type of propaganda into the Indian masses’ consciousness. There has been a concerted effort by media,

The immense love and support received by the movie also says a lot about the paradigm shift that India is witnessing. Indian society and specially the youth is indeed at the cusp of a transformational shift where a film which depicts the story of the plight of Hindus with a sense of nationalism has been appreciated and loved across all sections of society

Bollywood and the like for a long time to suppress the events like the massacre of Kashmiri Pandits, Marichjhapi massacre etc from the public, and previous governments have been a party to this cover up. Kashmir Files for a change has tried to tell the story of Kashmiri Pandits who have been devastated by insurgency and terrorism in the valley, based on hard facts and presents the tragic exodus as genocide, that was purposely kept distant from the rest of India by media and previous governments due to vested interests. It talks about the endless cycles of violence, waves of separatism, infiltration of Pakistan-funded terror outfits, and growing discontent amongst people, and journalistic propagandas. It depicts agony, torture and several years of waiting for justice of 5 lakh Kashmiri Pandits.

The immense love and support received by the movie also says a lot about the paradigm shift that India is witnessing. Indian society and specially the youth is indeed at the cusp of a transformational shift where a film which depicts the story of the plight of Hindus with a sense of nationalism has been appreciated and loved across all sections of society. This is an inflection point for us as a society where we are seeing more and more Indians opening up and acknowledging the threat we face today. Kashmiri Pandits having to leave everything behind in the 1990’s when Kashmir echoed with the announcements of “Raliv, Galiv, Chaliv” (convert, leave or die) is a possibility today in many parts of India. For example, Assam, which has seen dramatic demographic changes, has recognized the threat. The Chief Minister of Assam , Himanta Biswa Sarma, after watching Kashmir Files has urged awareness to ensure that the fate of the Kashmiri Pandits is not replicated in Assam by its older communities that are being rapidly outgrown by newcomers.

The film is also important because it exposes the double standards of the idea of “Kashmiriyat” (also spelled as Kashmiriat) which is the centuries-old indigenous tradition of communal harmony and religious syncretism in the Kashmir Valley in the present day context. The film now provides for an absolutely authentic and brilliantly crafted alternate material for the west to see and understand the dynamics of Kashmir. All these years the west has been intentionally and categorically feeded with material that presented a certain picture of India’s role in Kashmir. The film could be and is already being used as a means to strengthen our standing as a “soft power” to present India’s side of the Kashmir story. So much so that State of Rhode Island in US has officially recognized Kashmiri Hindu “genocide” with validation from the Speaker of House, and the Majority & Minority Leaders of the House of Representatives.

Last but not the least, Kashmir Files has opened up a plethora of opportunities for budding film-makers who want to make films based on facts and has also main-streamed an authentic nationalistic way of storytelling in India’s Bollywood. Bollywood has for several decades been known to steer clear of sensitive and political issues that have had Hindus at the receiving end of suffering due to many reasons, ranging from the influence of underworld funding and to left-liberal cabal resistance to it. However, with the immense love that Kashmir Files has received and as we see big names in Bollywood also slowly coming in support of the film, there are hopes that an eco-system will develop in Bollywood that could also present the other side of the story too.

The belated but aggressive reaction by those who have spun negative narratives about India, and conspired to suppress gory truths like the fate of the Pandits, indicates that they know the country has changed. It is no longer willing to be lulled into complacency by their propaganda, and has developed both a conscience as well as the stomach to face up to our history as it was and not as leftist ideologues have shaped it.

This heralds a turning point, for both Bollywood and the nation as a whole. There is now much anticipation of more suppressed truths to be brought out.