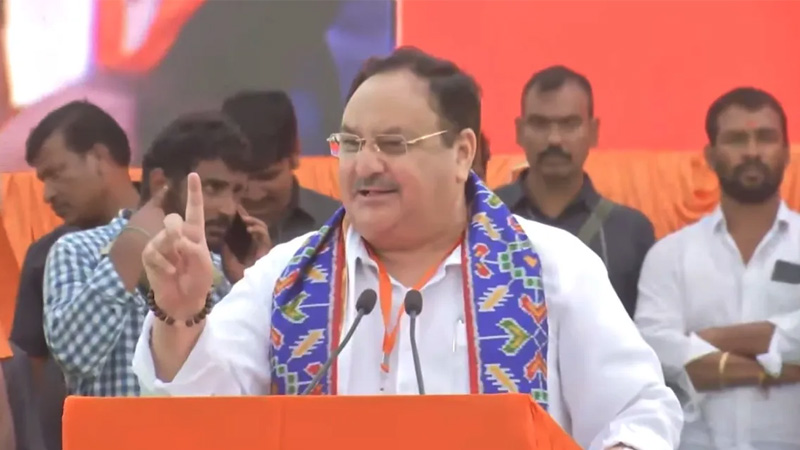 The third phase of the “Praja Sangrama Yatra” under the leadership of Telangana BJP President Shri Bandi Sanjay Kumar was concluded with a massive public meeting at the Hanamkonda town in Telangana on 27 August, 2022. The State BJP President covered a total of 1,121 km across 41 Assembly constituencies in 18 districts of the state during the first, second and third phases of the Yatra together. The BJP National President Shri Jagat Prakash Nadda, Union Minister of Tourism, Culture and Development of North Eastern Region Shri G Kishan Reddy, Telangana BJP President Shri Bandi Sanjay Kumar and other senior leaders also addressed the rally.

While addressing the mammoth rally, BJP National President Shri JP Nadda said the motive behind the “Praja Sangram Yatra” was to take Telangana out of the darkness of TRS and bring hope amongst the people. The motive behind this Yatra is to sensitize and build a people’s movement against the highly corrupt TRS government.

The BJP National President said the massive success of the Yatra made it crystal clear that the people of Telangana have made up their mind to uproot the highly corrupt government and will bring BJP to power in Telangana.

Shri Nadda said, “You may recall that a few months ago the KCR government had arrested State BJP President Shri Bandi Sanjay Kumar in a highly undemocratic manner, and then I came to the state to get him released. That time also I was stopped at the airport on the pretext of the Corona Pandemic”. Telangana was ruled by Nizams, the last Nizam was Usman Ali Khan whose last diktat was — Ghasti Nisan 53. It meant that no one can organize public meetings in Telangana, no one can give speeches, no one can open school and no one can run a newspaper. But Mir Usman Ali Khan forgot that it was his last diktat. Today, I want to tell Nizam KCR that your “Prohibitory Orders” will be your last diktat. Your departure is certain now, the BJP National President added.

Shri Nadda said democracy is in danger in Telangana due to KCR’s actions. Hence, in the coming elections people of Telangana will send him home and bring BJP to power.

BJP National President Shri JP Nadda said that the Modi government is implementing host of schemes for the empowerment of Dalits, women, youth, farmers and other weaker sections of the society. Contrarily, KCR was diverting funds provided under the schemes of the Central government and giving his name to the Central schemes.

He said the Centre sanctioned Rs 377 crore for relief works in food-hit 11 districts and released Rs 188 crore but KCR did not provide any help to the victims. Centre provided Rs 3,982 crore under ‘Jal Jeevan Mission’ but Telangana spent only Rs 200 crore. Under the ‘Pradhan Mantri Awas Yojna’ the funds sent by the Narendra Modi Government to Telangana are being misused and wasted, causing major loss to the people of the state.

BJP FIRST PARTY WHICH SUPPORTED FOR A SEPARATE TELANGANA

The Bharatiya Janata Party was the first party which openly supported creation of a separate Telangana state. KCR had promised that every year in September the state will celebrate ‘Liberation Day’. But now he is so busy playing his politics of appeasement that he has forgotten all his promises. Under the pressure of Majlis KCR has forgotten to celebrate ‘Liberation Day’ which symbolizes end of Nizam rule Shri Nadda said.

He further said once the Bharatiya Janata Party government is formed in Telangana, every September we will celebrate ‘Liberation Day’, as an official function.

TRS made all out efforts to stall the Yatra: Bandi Sanjay

Addressing the Yatra, Telangana BJP President Shri Bandi Sanjay Kumar said people from all walks of life expressed their resentment against the all out efforts of the ruling TRS to stall the third phase of the Padayatra. He said the BJP cadres will not be cowed down by the illegal arrests and lathi-charges.