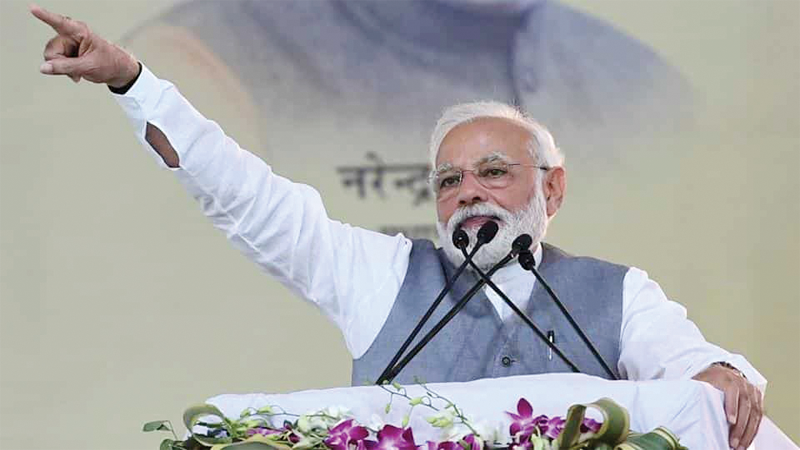 Prime Minister Shri Narendra Modi said it was Pakistan which “cried” after the Indian Air Force (IAF) carried out a strike at terror camps of Jaish-e-Mohammed deep across the Line of Control. He said Pakistan had done its preparation after Pulwama attack expecting a post-Uri style surgical strike, but “we went by air”.

“When surgical strike happened, we informed the country about it…After Pulwama, we did what we had but we were keeping quiet. It was Pakistan that started crying at 5 am on Twitter. Pakistan started crying ‘Modi ne maara, Modi ne maara’ (Modi hit us, Modi hit us)…But some people, who eat of India but make statements to help Pakistan,” PM Shri Modi told a public rally in Noida.

The Prime Minister said, “After Pulwama attack, the brave soldiers of India did what had not been done in decades. They hit the terrorists and their patrons.”

“Pakistan expected that Modi will carry out another surgical strike. They made heavy deployment along on the ground. But we went there by air,” he said.

PM Shri Modi targeted the opposition leaders once again for seeking clarification from the government over the IAF strike in Balakot terror camps belonging to Jaish-e-Mohammed, the terror outfit which claimed responsibility for attack in Pulwama killing 40 CRPF jawans on February 14.

He said, “Pakistan has admitted that IAF strike happened there. The IAF has stated that they carried out a strike at terror camp. But some people still have doubts and raise questions…They are just helping Pakistan.”

PM Shri Modi blamed the previous governments for adopting policies that allowed the menace of terrorism turned into a “naasur” (canker).

“After the surgical strike and air strike, the patrons of terror have understood this is not the India of old…Terror attacks and blasts even earlier were linked to Pakistan. But the previous governments just changed the home minister. Should such situations be dealt with by changing home minister or policy? We changed the policy,” PM said.

Stating the terrorists are in panic after strict action taken by India, PM Shri Modi said it is the time to stay “alert” against those “trying to break the nation”.