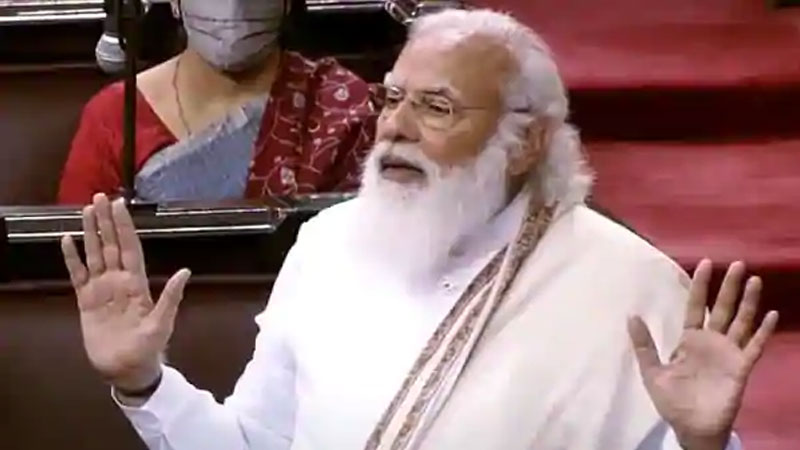 Prime Minister Shri Narendra Modi on July 19, 2021 lashed out at the Opposition for creating a ruckus and preventing him from introducing newly-inducted Union Ministers in the Lok Sabha and the Rajya Sabha, saying such a negative mindset has never been seen in Parliament. As the Prime Minister rose in the Lok Sabha to introduce the new Ministers, Opposition members created uproar by raising slogans. Dismayed over the disruption, Shri Modi said, it should make everyone proud that several women, many people belonging to the SC and ST community have taken oath as Ministers.
In the Rajya Sabha also, while the Prime Minister introduced the newly-inducted Ministers, several slogan-shouting Opposition members trooped into the well of the House obstructing the proceedings. The Prime Minister slammed the Opposition over it. Excerpts of the speech;


Speaking in the Lok Sabha the Prime Minister Shri Narendra Modi said, “I was thinking that today there will be an atmosphere of enthusiasm in the House because a large number of our women MPs, SC, ST brothers have become ministers in large numbers”.
He said, “This time our fellow MPs in the house who are from farmers’ family and from rural areas, belong to socio-economically backward class and OBC community got a chance in the council of ministers in large numbers. I would have enjoyed introducing them if they would have been honored by thumping the bench from every corner of the house”.
However, it seems some people can’t digest that more women, SC, ST and OBC community members are becoming Ministers.
Shri Modi said, “Therefore, they do not even allow me to introduce them. And therefore, Hon’ble Speaker Sir, the newly appointed members of the cabinet should be considered as Introduced in the Lok Sabha”.
In Rajya Sabha the Prime Minister Shri Narendra Modi said, “It is a matter of pride that people from rural India, who come from ordinary families, have taken oath as Ministers. But some people don’t want Ministers to be introduced. They also have an anti-women mindset since they do not want women Ministers to be introduced to the House”.
“Such a negative mindset has never been seen in Parliament,” he said in the Rajya Sabha.