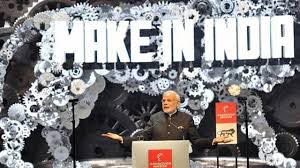 nder ‘Make In India Campaign’ Chinesecompanies have shown significant interest to invest in India in a wide range of sectors since the launch of Make in India campaign.As per data maintained by DIPP/RBI, between April,2000 and December,2016, cumulative FDI inflows from China were INR 9,933.87 crores. Of the cumulative FDI equity inflows, 77.9% have been received since 2014 as detailed below:-

Pursuant thereto, Joint Working Group (JWG) of the Indian side was constituted on 16th July,2014 to act as the nodal point to identify and agree upon the detailed modalities for implementing cooperation under the said agreement, and to periodically review progress. Three JWG meetings have so far been held. The last meeting of JWG was held on 2.11.2016 at Beijing, China.It was decided during the meeting that both sides will encourage all stakeholders to expedite the implementation for which all necessary facilitation would be provided.