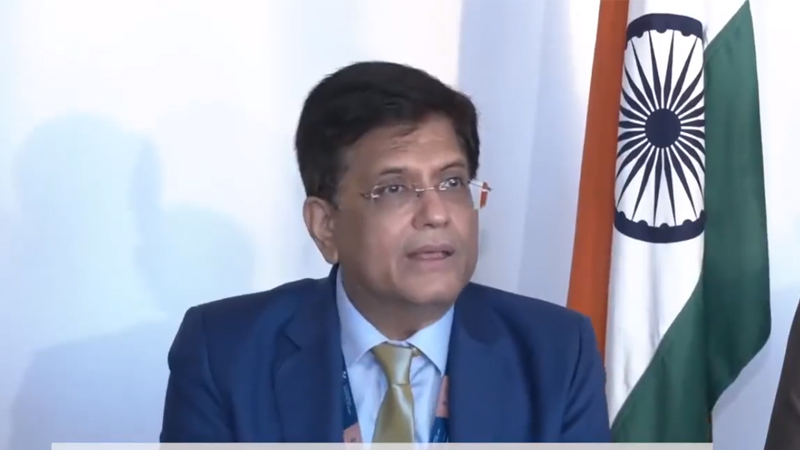 The twelfth WTO ministerial conference(MC12) commenced on June 12th. It concluded on June 17th in Geneva, Switzerland, which has brought favourable outcomes for India and other developing countries. India was leading from the forefront in the five days of a long negotiation at the conference. Poor and developing countries were looking to India to seal favorable and just deal. The critical concerns of the conference were food security and agriculture, fisheries subsidies; intellectual property rights waiver on COVID-19 vaccines and pandemic response; WTO reforms: and extension of the moratorium on customs duty on E-transmission.

Union Commerce and Trade Minister Shri Piyush Goyal led the Indian delegation at the WTO. The most crucial concern before the Indian delegation was to protect India’s food grain procurement program at Minimum Support Prices (MSP). It is one of the country’s important programs protecting farmers and consumers. Other developing countries will benefit from this public procurement scheme as well. Developed countries saw it as a violation of trade norms. However, India argued its case on the basis of WTO fundamental principles, which include special and differential treatment. India was looking for a long-term solution to public stockholding for food security. This negotiation has been postponed until the next ministerial conference.

For the past 20 years, discussions about limiting fisheries subsidies have been ongoing. The WTO wished to limit subsidies that contribute to overfishing. WTO members must eliminate subsidies within seven years of signing the agreement. The seven-year period will end in 2030. India and other poor countries wanted a decision to extend the transition period to 25 years rather than 30 years in order to protect the interests of their fishermen. In the negotiations to extend subsidies, India successfully defended its position. The contentious clauses that proposed a seven-year ban on overfishing subsidies have been removed. The defending subsidies are vital for its fishermen. A significant number of people, approximately four million, rely on fisheries for a living. Their situation is not mature enough to survive without government protection.

WTO members have not agreed to impose any customs duty on electronic transmission since 1998. The developed world wants a permanent moratorium. India has been vocal in its opposition to a permanent moratorium on custom duty. India claimed that developing countries were losing money. Customs duty exemption benefited developed countries disproportionately. India asserts that reconsidering the moratorium is important for developing countries’ digital advancement. Finally, India agreed to extend the moratorium only for 18 months.

A patent waiver for covid vaccines is a priority for this ministerial conference because it is critical for combating covid-19. The majority of the least developed countries have not yet been fully immunised. The WTO agreed to grant a five-year patent waiver on covid vaccines. Although the waiver was opposed by China. For the next five years, India and other eligible developing countries can manufacture and export vaccines without obtaining permission from the original manufacturers. It will also save lives in some of the world’s poorest countries and assist Indian companies in establishing more manufacturing plants in a number of countries.

India continues to support WTO reforms that preserve Special and Differential Treatment (S&DT), such as consensus-based decision-making and making it non-discrimination. Member countries agreed to work together to strengthen the WTO’s operations. This work should be transparent and meet the needs of all members, especially developing countries that receive preferential treatment.
In this multilateral engagement, India played crucial role to facilitate the negotiation. Indian delegation reached out to several countries to bring out productive outcome of the negotiation.