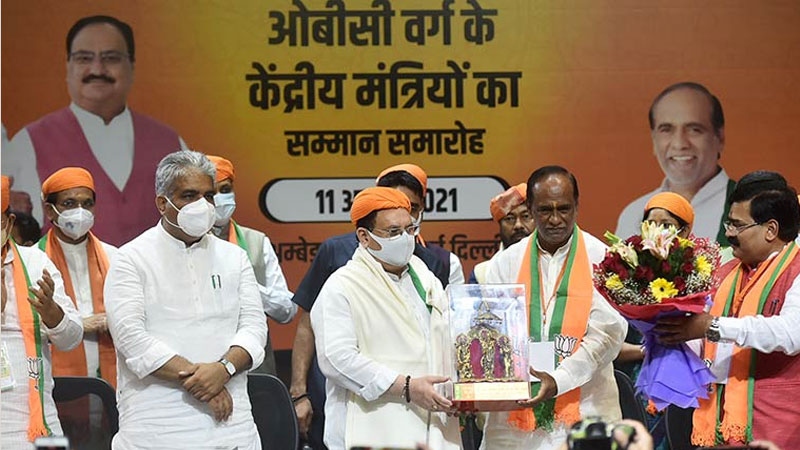 BJP National President Shri Jagat Prakash Nadda, while addressing the felicitation function organized by BJP National OBC Morcha in the honour of 27 new Union Ministers coming from OBC community at Dr. Ambedkar International Center in New Delhi on 11 August, 2021 said that inclusion of 27 ministers from the OBC community in the cabinet and giving constitutional status to the OBC commission shows the commitment of the Prime Minister Shri Narendra Modi government for the upliftment of the OBC society.

While addressing the programme, the BJP National President said that 27 OBC ministers included in the expansion of the Union Cabinet is not a small thing. Today, 35 percent of the ministers in the Union Cabinet are from the OBC category. Efforts have been made to give representation to all communities in the new cabinet. Efforts have also been made to connect all the states and all the regions. Prime Minister Shri Narendra Modi discussed for hours with the organization for the expansion of the cabinet, then this bouquet of India is being conceptualized.

Shri JP Nadda said that 12 ministers from SC community, 8 ministers from ST community, 5 ministers from minority community and 11 women ministers have been included in the new cabinet. Was there ever such representation of societies in the Congress government earlier? The reason for this was their mentality, which says that running the country is possible only with one family.

The National President said that OBC Commission has been given constitutional status during Modi government. When the OBC Commission was given constitutional status, the Congress protested in the Lok Sabha. When this bill came in the Rajya Sabha, it was first sent to the Select Committee. After returning from there, the Congress again opposed it, but when we became powerful in the house, then this bill got constitutional status. Who was hindering in getting 27 percent reservation for children in Kendriya Vidyalaya? Prime Minister Shri Narendra Modi has raised the level of creamy layer from Rs.6 lakh to Rs.8 lakh. Why did the previous governments not notice this?

Prime Minister Shri Modi has also given reservation OBC category in NEET. Prime Minister Shri Narendra Modi has done the work of giving gas connections to 8 crore people under the Ujjwala Yojana and giving respect to the women of the village by building 11 crore toilets under the Swachh Bharat Abhiyan.

Referring to the Olympic Games, the BJP National President said that today the picture of India has changed in the Olympic Games. For this, Prime Minister Shri Narendra Modi had started work from 2014 itself, its result has been seen in Tokyo. ‘Sabka Saath, Sabka Vikas, Sabka Vishwas’, this is our motto.