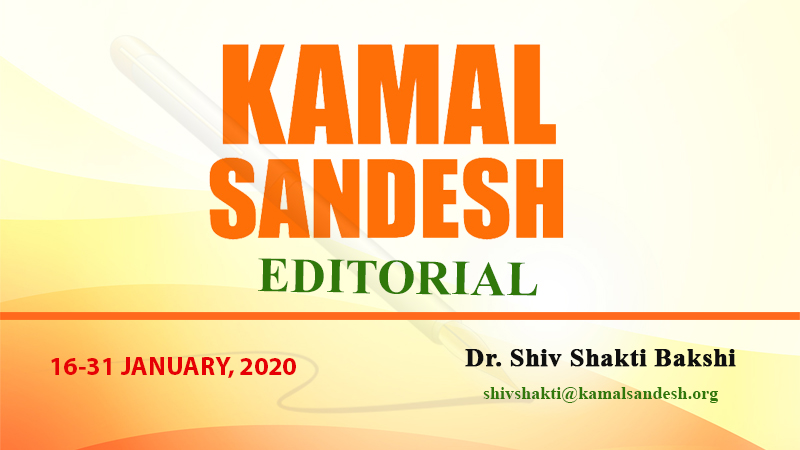 The kind of hooliganism, rioting, arson and mayhem on the streets were witnessed in the name of protest against Citizenship Amendment Act, 2019 (CAA) is not only condemnable but poses a threat to the democratic system of the country. The nation has witnessed a string of vandalism, massive damages to the public property, mob violence and disturbing scenes across the country challenging the parliament and the democratic institutions of the country. It is highly unfortunate to note that Congress and its allies are continuously indulging themselves in rumour mongering, disinformation campaign and concocting false stories while instigating the protesters to resort to violent means. Such kind of politics has been the hallmark of Congress which is in the habit of taking recourse to divisive tactics while creating divisions in the society. But the time of such politics is over, people can see through the divisive designs of Congress and its allies as it gets further exposed by its acts of omissions and commissions.

The Modi government is getting massive support across the country on CAA. A large number of people are coming out to support the government on the issue of rehabilitation of persecuted minorities from neighbouring countries. Many of these people who were religiously persecuted in Pakistan, Bangladesh and Afghanistan and were forced to flee are still living in extremely miserable conditions even hiding their identities. They were facing inhuman conditions having no avenues for restarting their lives as legal citizens of India. The CAA has come to them as huge relief and as a hope for a new dawn in their lives. The Congress and its allies should have welcomed this immensely humanitarian step act of the Modi –government but they preferred vote-bank politics above the plight of these persecuted refugees. Congress and its allies have committed a grave mistake for which the nation will definitely make them answerable in the times to come.

The unfortunate incident of Nankana Saheb incident symbolises the persecution of minorities in Pakistan. It is highly deplorable that the Congress and its allies have not gone beyond the ritual lip service in condemning the incident and continued with their protest against CAA. The day the Nankana Saheb incident took place, all the anti-CAA protesters should have hanged their heads in shame and announced withdrawal of the violent protests and the Congress and its allies should have apologised to the nation. But alas, such incidents of dastardly persecution are not on the agenda of Congress and its allies and they even shy away from condemning the Pakistan for such inhuman acts of betrayal.

The fact that minorities in Pakistan, Bangladesh and Afghanistan are subjected to inhuman conditions, insecurity of life and property and forcible conversions has been continuously reported in national and international media. The decline in the numbers of minorities in these countries are also testimonies to the fact that either they were continuously and systematically eliminated, forcibly converted or made to flee from these countries. As the partition was accepted by the Congress on the ground of religion and Jinnah’s two-nation theory, the guarantee of the life, property and dignities of the minorities left in Pakistan was sought to be ensured through Nehru-Liaquat pact. As the Nehru-Liaquat pact has failed miserably in the addressing the minority question in Pakistan and today’s Bangladesh, India owes a moral responsibility towards the Hindus, Sikhs, Jains, Budhhists, Parsis and Christians left behind in Pakistan. The CAA addresses that moral responsibility for which Prime Minster Shri Narendra Modi is being praised across the country. The Bharatiya Janata Party under the leadership of BJP National President Shri Amit Shah and BJP National Working President Shri JP Nadda has also started a nationwide contact programme to present facts about CAA. The nation today stands united in support of CAA and congratulates Modi government for resolving a longstanding issue and bringing light of hope in the lives of persecuted minorities of the neighbouring countries.