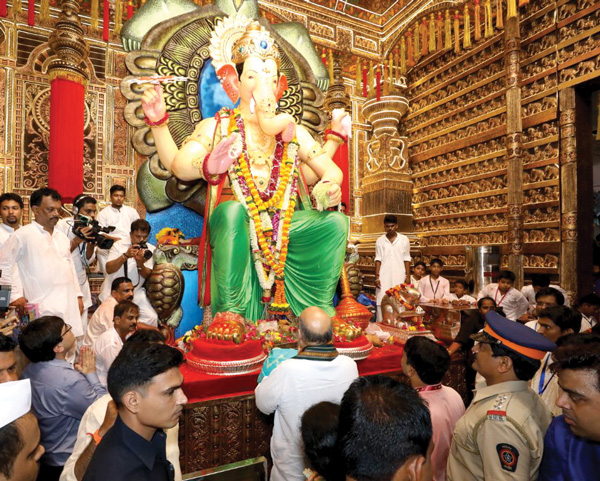 During a day’s Pravas to Mumbai, Maharashtra on 27 August, 2017 BJP National President Shri Amit Shah visited Bandra’s Ganesh Mandal, Lalbaughcha Raja Ganesh Mandal and then addressed party Karyakartas gathered at Y B Chavan Pratishthan at Nariman Point. Addressing the Karyakartas Shri Shah said, “The Narendra Modi-led BJP government completed three years in power but not even the Opposition has been able to accuse it of corruption”.

Shri Shah lauded the Prime Minister for taking politics beyond considerations of caste, family-dominance, appeasement and vote-banks and mainstreaming the politics of performance in the country.

Shri Shah lambasted the erstwhile Congress-led UPA government for scams worth Rs 12 lakh crore. He said no one from Modi’s family or extended family has ever misused his position. There are few leaders who live by such staunch standards of probity in their personal lives.

Shri Shah said formation of any government is very easy but moulding of party workers from the common man is very difficult. PM Shri Modi has created hundreds of karyakartas and brings back dignity to the organisation which was lost and where leader-centric politics was promoted.

Highlighting Shri Modi’s work he said, “Before taking oath as Chief Minister of Gujarat, Shri Narendra Modi had never been elected neither in college election nor as Sarpanch (village chief) of a Gram Panchayat. He did not have any experience but with his devotion, hard work and commitment, he made BJP as Ajey (undefeated) party.”

When the politics of the nation was changed from loyalty towards an organisation to loyalty with a certain leader, Shri Modi focused on booth-level party workers, motivated them and bring back stature to the party, he said. “The victory in all elections held in Gujarat right from Gram Pamchayat to Parliament since 1995 is the result of party workers. Moulding of party workers is not as easy as forming governments, Shri Shah said.

Shri Shah said when the previous government was confused over whether to promote agricultural policy or industries, whether to protect welfare of the poor or bring reforms, Modi implemented a policy for the agriculture sector and promoted industries and at the same time bringing reforms in policies.

He further said, “Modi has changed the scale of politics. He reinstated the dignity to the post of Prime Minister which was lost during Dr. Singh as all ministers considered themselves as PM and PM himself was not considered as one,” Shri Shah said.

“This is the beginning of transformation of developmental politics and due to which Modi has become the leader of the world. When the world stands up during Modi’s speech, it is not respect towards BJP or Modi, it is in respect of the 125 billion people of India,” Shri Amit Shah added.

During the inauguration of a book “Hamare Narendrabhai”— a Hindi translation of a Gujarati book by Kishor Makwana on PM Narendra Modi in Mumbai, on 27 August, 2017, BJP National President Shri Amit Shah praised Prime Minister Shri Narendra Modi, his work and said he is a ‘Vaishwik Neta’ (world leader). The original book in Gujarati was published in 2010 and now it has been translated into Hindi.
Earlier, Maharashtra Chief Minister Shri Devendra Fadnavis, Union Minister for Railways Shri Piyush Goel and BJP Mumbai President Shri Ashish Shelar addressed the gathering and praised PM Shri Narendra Modi’s work, his vision and mission.