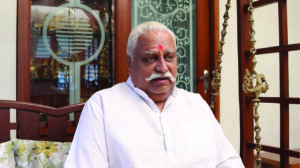 But this was not the first time that PM Shri Modi resumed his duties after enduring a personal loss. A similar incident took place when his father Shri Damodardas Modi passed away in 1989. A similar commitment towards his work was displayed by Shri Narendra Modi even at that time.

Shri Dilip Trivedi from Gujarat recalls the incident from 1989. He says that there was an organisational meeting to be held in Ahmedabad. That meeting was supposed to be attended by Shri Narendra Modi also.

Everyone thought that Shri Narendra Modi won’t be able to attend the meeting and therefore Karyakartas decided to start the meeting without him.

To everyone’s surprise, Shri Narendra Modi reached the meeting venue in the afternoon and attended the rest of the session.

After the meeting was over, we went to him and asked about his presence in the meeting despite a personal loss back home. He replied that after attending the funeral he left home for the meeting. Shri Modi further said that since it was an important meeting and we have to proceed with our duties therefore it was necessary to participate in this meeting.

Shri Trivedi says that it was an important lesson for all the Karyakartas present there that despite such a personal loss, Shri Narendra Modi was committed towards his duties. Shri Trivedi further says that this is a true example of being a Karmyogi!