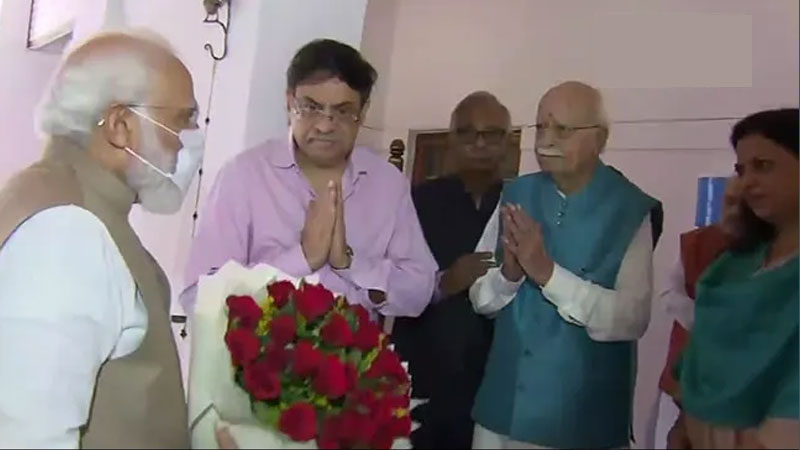 PM MODI CALLS ON ADVANI JI & Greets him ON HIS BIRTHDAY

Prime Minister Shri Narendra Modi on 08 November, 2021 drove to the residence of former Deputy Prime Minister and BJP senior leader Shri LK Advani and greeted him on his birthday. Shri LK Advani turned 94. PM Shri Narendra Modi arrived with a bouquet at Shri Advani’s residence and also took part in a cake-cutting ceremony. The Prime Minister praised Shri Advani for his scholarly pursuits and rich intellect, and also credited the senior leader for his efforts towards empowering people and enhancing our cultural pride.

In his twitter message the PM Shri Narendra Modi said, “Birthday greetings to respected Advani Ji. Praying for his long and healthy life. The nation remains indebted to him for his numerous efforts towards empowering people and enhancing our cultural pride. He is also widely respected for his scholarly pursuits and rich intellect”.

BJP National President Shri JP Nadda, while wishing Shri LK Advani a long and healthy life, praised the veteran leader for taking the party to the masses and playing a key role in the country’s development. Shri Advani was an inspiration to crores of party workers, he said.

In a tweet, Union Defence Minister Shri Rajnath Singh praised Shri LK Advani as an inspiration and guide, and said he is counted among those most respected leaders whose scholarship, foresight and intellect are acknowledged by everyone.