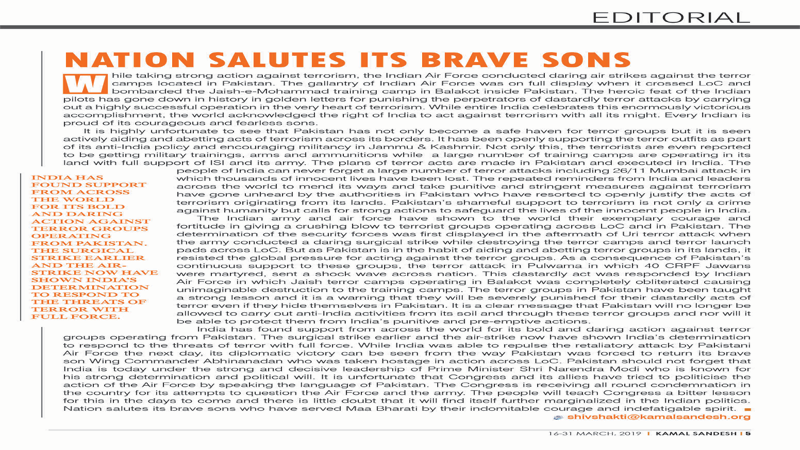 While taking strong action against terrorism, the Indian Air Force conducted daring air strikes against the terror camps located in Pakistan. The gallantry of Indian Air Force was on full display when it crossed LoC and bombarded the Jaish-e-Mohammad training camp in Balakot inside Pakistan. The heroic feat of the Indian pilots has gone down in history in golden letters for punishing the perpetrators of dastardly terror attacks by carrying out a highly successful operation in the very heart of terrorism. While entire India celebrates this enormously victorious accomplishment, the world acknowledged the right of India to act against terrorism with all its might. Every Indian is proud of its courageous and fearless sons.

It is highly unfortunate to see that Pakistan has not only become a safe haven for terror groups but it is seen actively aiding and abetting acts of terrorism across its borders. It has been openly supporting the terror outfits as part of its anti-India policy and encouraging militancy in Jammu & Kashmir. Not only this, the terrorists are even reported to be getting military trainings, arms and ammunitions while a large number of training camps are operating in its land with full support of ISI and its army. The plans of terror acts are made in Pakistan and executed in India. The people of India can never forget a large number of terror attacks including 26/11 Mumbai attack in which thousands of innocent lives have been lost. The repeated reminders from India and leaders across the world to mend its ways and take punitive and stringent measures against terrorism have gone unheard by the authorities in Pakistan who have resorted to openly justify the acts of terrorism originating from its lands. Pakistan’s shameful support to terrorism is not only a crime against humanity but calls for strong actions to safeguard the lives of the innocent people in India.

The Indian army and air force have shown to the world their exemplary courage and fortitude in giving a crushing blow to terrorist groups operating across LoC and in Pakistan. The determination of the security forces was first displayed in the aftermath of Uri terror attack when the army conducted a daring surgical strike while destroying the terror camps and terror launch pads across LoC. But as Pakistan is in the habit of aiding and abetting terror groups in its lands, it resisted the global pressure for acting against the terror groups. As a consequence of Pakistan’s continuous support to these groups, the terror attack in Pulwama in which 40 CRPF Jawans were martyred, sent a shock wave across nation. This dastardly act was responded by Indian Air Force in which Jaish terror camps operating in Balakot was completely obliterated causing unimaginable destruction to the training camps. The terror groups in Pakistan have been taught a strong lesson and it is a warning that they will be severely punished for their dastardly acts of terror even if they hide themselves in Pakistan. It is a clear message that Pakistan will no longer be allowed to carry out anti-India activities from its soil and through these terror groups and nor will it be able to protect them from India’s punitive and pre-emptive actions.

India has found support from across the world for its bold and daring action against terror groups operating from Pakistan. The surgical strike earlier and the air-strike now have shown India’s determination to respond to the threats of terror with full force. While India was able to repulse the retaliatory attack by Pakistani Air Force the next day, its diplomatic victory can be seen from the way Pakistan was forced to return its brave son Wing Commander Abhinanadan who was taken hostage in action across LoC. Pakistan should not forget that India is today under the strong and decisive leadership of Prime Minister Shri Narendra Modi who is known for his strong determination and political will. It is unfortunate that Congress and its allies have tried to politicise the action of the Air Force by speaking the language of Pakistan. The Congress is receiving all round condemnation in the country for its attempts to question the Air Force and the army. The people will teach Congress a bitter lesson for this in the days to come and there is little doubt that it will find itself further marginalized in the Indian politics. Nation salutes its brave sons who have served Maa Bharati by their indomitable courage and indefatigable spirit.
shivshakti@kamalsandesh.org