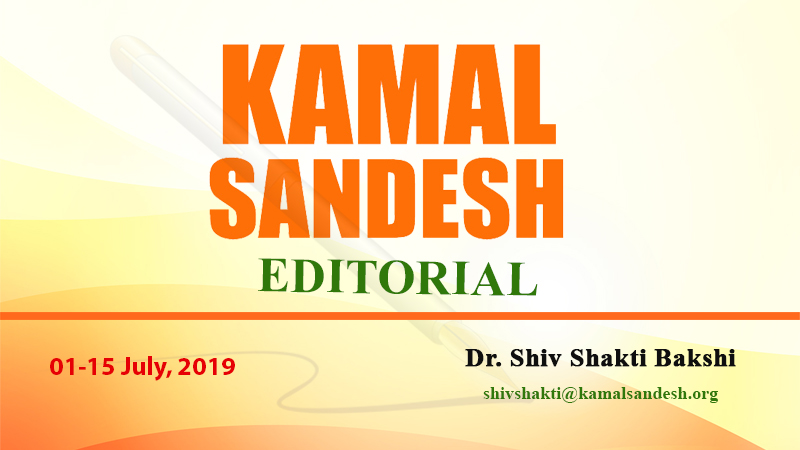 The massive mandate has come with massive responsibilities. It is the outcome of huge trust that the people have in the leadership of Prime Minister Shri Narendra Modi and the BJP led NDA government and the credibility earned through vision and hard work in the last five years. It is the sense of responsibility and duty towards the nation that the Modi government is working tireless with the commitment to build a ‘New India’. The ‘speed, scale and skill’ employed in getting results of a large number of innovative projects and programmes are getting worldwide recognitions paving the path for greater achievements at various levels. In the presidential address at the beginning of the current parliamentary session, the priorities of the government have been outlined. While the remarkable achievements of the Modi government in the last five years have been recounted with the promise of their continuance, the agenda for the future instils a sense of hope and trust in the people of India. The presidential address has re-assured the people of India that the Modi-government is moving ahead with a comprehensive framework, covering every sector of the economy while taking care of every section of the society with the mantra of ‘Sabka Saath, Sabka Vikas, Sabka Vishwas’. Not only that the presidential address has dwelled over different sectors of economy and immediate requirements but also charted an environment friendly developmental path with futuristic approach and long term vision. The Modi government should be congratulated for its commitment for building a strong, prosperous and glorious India which can claim high position in the world in the days to come.

While the Modi government is laying the foundation of a great nation, the BJP organization is further strengthening itself with the launch of new membership drive seeking to increase 20 per cent membership in the coming months. As BJP has emerged as the hope of the people, the national aspirations are now reflected in the expansion and consolidation of the organization in different parts of the country. The Lok Sabha elections 2019 has manifested the expectations of the people in the entire nation with BJP breaking new grounds and getting massive supports in the newer areas. It is therefore the responsibility of the BJP that the support base is given ample representation in the organization and with this vision BJP National President Shri Amit Shah has once again initiated the process of membership drive with the aim of enrolling new members so as to further strengthen and consolidate the organization. As the largest political organization of the world, in the coming months, the BJP will further add up to its numbers and become much bigger organization thus becoming an example in itself.

As huge opportunity in terms of increasing its support base by serving the people in every nook and corner of the country awaits BJP, the appointment of Shri Jagat Prakash Nadda as its working president by the BJP Parliamentary Board is set to add more energy and dynamism to the party. Shri Jagat Prakash Nadda who earlier served at different level in the party and as union minister in the last Modi government enjoys the reputation of an organization man who has risen from the ranks and represents experience, commitment and high ethos of the organization. The appointment of the working president once again reinforces the high principles and ideals of a democratic political party which BJP today represents in the country. There is no doubt that in the leadership of BJP National President Shri Amit Shah and BJP Working President Shri Jagat Prakash Nadda, the party will scale newer heights in the days to come. The remarkable achievements of the BJP led NDA government in the leadership of Prime Minister Shri Narendra Modi is set to enhance the credibility of the leadership and BJP will be able to consolidate it further in the days to come. The idea of ‘Nation First, Party Next, Self last’ will continue to inspire all the karyakartas in the service of Maa Bharati.