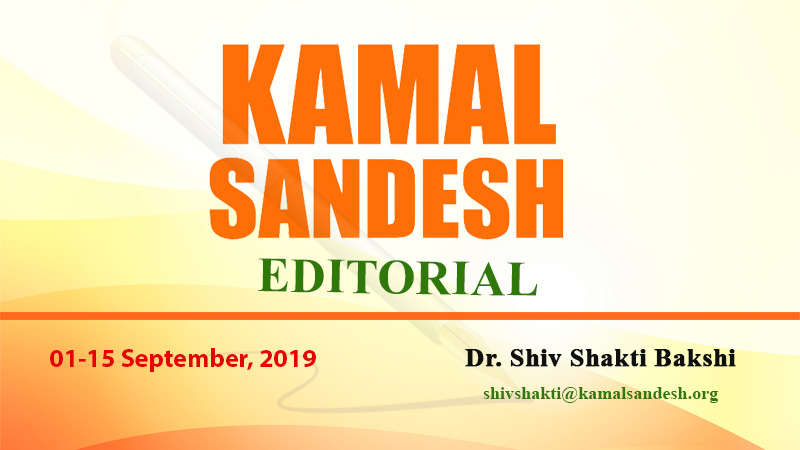 The Prime Minister Shri Narendra Modi while addressing the nation from the ramparts of the Red Fort once again exhorted the country to scale newer heights with stronger confidence, deeper resolve and higher aspirations. It was the sixth time in a row that the Prime Minister has motivated the nation on independence day towards higher goals and instilled a new hope and commitment in every citizen to make contribution for a ‘New India’. The efforts of the Prime Minister to engage every individual with the nation building process may be seen in various government programmes getting support of the people and appeal of the Prime Minister to voluntarily relinquish subsidies and concessions getting responded by millions in the country. He has been able to garner support of the people for many government programmes and schemes by motivating them into participating in these programmes and raising the level to mass movements. It has resulted in India gaining momentum on every front and registering unprecedented achievements having global recognitions. The address has announced the arrival of a ‘New India’.

India has travelled a long way in the last five years under the charismatic leadership of Prime Minister Shri Narendra Modi. Gone are the days of Congress led UPA’s era of massive corruption, loot, misrule and policy paralysis, now the era of good governance, development and corruption free government has dawned in India. Now India has a government having a work culture which delivers, which is accountable and which is transparent. India has a government which takes decisions, and when a decision is taken it is implemented. The government is committed to the welfare of the poorest of the poor, deprived and oppressed, youth and women. A government which has prioritised rural sector, farming community and labourers and brought huge reliefs to them by taking innovative and result oriented initiatives. A government which can score high on the scales from Ease of Living to ‘Ease of Doing Business’, a government which is committed to bring positive, sustainable and long-term change in the country. As a result, the world is acknowledging today that India is passing through a massive transformation and emerging as a great country which is aware of its goals and responsibilities.

The Modi government has seen achievements piling up from taking immense efforts to improve the standard of living to planning and implementing Mission to Moon and Mars. It shows the broadening span of achievements wherein a government is aware of its responsibilities in every sector of governance in the nation’s glorious journey. While the poorest of the poor are getting pucca houses, free gas cylinders, electricity connections, health coverage upto 5 lac and many other crucial support, the nation is also pursuing the goal of becoming 5 trillion USD in the next five years. The speed, scale and skill of government’s work can be seen in largescale transformational projects being launched in almost every sector making huge infrastructural development with the planned investment of 100 lac crore in the coming five years. India is aspiring higher and higher with every passing day in the dynamic leadership of Prime Minister Shri Narendra Modi.

The world is witnessing what kind of transformation a determined and confident government can bring to a country. The strong political will of the Prime Minsiter Shri Narendra Modi can be seen in every decision of the government. It is also because of the huge faith reposed by the people of India in his leadership that the BJP under his leadership was able to secure full majority in the last to elections. The result of the massive mandate can be seen in historic decisions and a strong leadership which is changing the fate of the nation. After coming back to the government with even higher numbers in parliament, the Modi government has delivered in 70 days what was unimaginable in the last 70 years. Apart from a highly productive parliament session in decades, the laws enacted on terrorism, Triple Talaq, abroagation of Article 370 & 35 A and reorganization of Jammu- Kashmir have been registered in golden letters in the pages of history. As the nation rests assured of an extremely capable, dynamic and charismatic leadership in Shri Narendra Modi, India looks forward to a new era wherein the people are ready to write their own destiny through massive participation in nation building process with every single individual dedicated in the service of Maa Bharati.