The Bharatiya Janata Party on 17 December, 2022 staged a nationwide protest condemning Pakistan Foreign Minister Bilawal Bhutto for making derogatory remarks about Prime Minister Shri Narendra Modi that sparked an outrage across the country. The minister made these remarks during a press conference at the United Nations in New York. 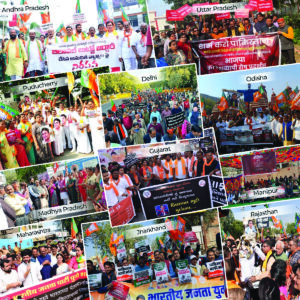 BJP leaders in Pune led by Maharashtra BJP President Shri Chandrashekhar Bawankule held a protest at Tilak Chowk. The Karyakartas also protested in Mumbai and other cities in the state.

In Karnataka and Telangana also, several leaders and protestors took out rallies and raised slogans against Bilawal Bhutto and Pakistan and demanded an unconditional apology.


External Affairs Minister Shri S Jaishankar also ripped into Pakistan over its role in sponsoring and spreading terrorism and advised Islamabad to clean up its act and try to be a good neighbor. In reply to a question from a Pakistani journalist, who accused India of spreading terror, Shri Jaishankar replied,” You are asking the wrong minister when you say how long will we do this. It is the ministers of Pakistan who will tell how long Pakistan intends to practice terrorism.”

Addressing a press conference, Union Ministers Shri Anurag Thakur and (MoS) Smt. Meenakshi Lekhi also condemned Bhutto’s remarks as a sign of intellectual bankruptcy. They said the remark has been made to remain in power, mislead the world and divert global attention from Pakistan’s collapsing economy, lawlessness and anarchy, and simmering differences in the Pakistani army, its deteriorating global relations and the fact that Pakistan has become the major sanctuary for terrorists. What more can be expected from Pakistan’s foreign minister which reflects his and his government’s desperation and mental bankruptcy?, they asked”.

In an official statement, the BJP said that the party condemned the shameful statement of the Pakistani Foreign Minister by burning his and Pakistan’s effigy in various states. Slamming Bhutto’s comments, the BJP said, the “reprehensible and uncalled for remarks have further lowered the image of Pakistan on the global platform. Let Pakistan not forget that their students were evacuated from war hit Ukraine under the protection of the Indian Tricolour.”

The statement said the comment is ‘highly derogatory and full of cowardice’ and said, “The statement is also aimed at misleading the world and diverting global attention from Pakistan’s collapsing economy, lawlessness and anarchy in Pakistan, simmering differences in the Pakistani army, its deteriorating global relations, and the fact that Pakistan has become the major sanctuary for terrorists”.