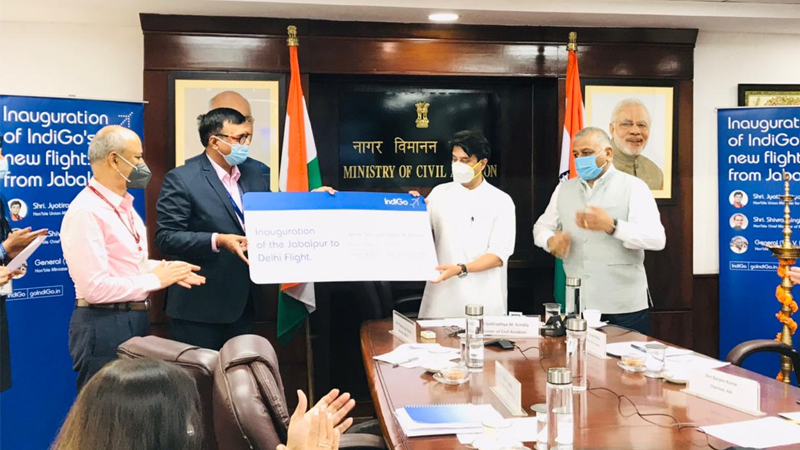 Shri. Jyotiraditya M. Scindia, Union Minister of Civil Aviation in his address said, “Democratization of the Indian aviation has been made possible in last 7 years under the leadership of our Prime Minister Shri Narendra Modi. The aviation that was a distant dream for the common people is now becoming accessible to all. Jabalpur is one of the most significant cities of Madhya Pradesh, the city has the potential of many opportunities for various sectors. From today, Jabalpur has now received additional flight connectivity with the capital of the country – Delhi & the financial capital of the country – Mumbai. Furthermore, the city will further get additional connectivity with Indore & Hyderabad from August 28th 2021. It gives me immense pleasure to announce that in the last 35 days we have commenced operations on 44 new flights in Madhya Pradesh out of which 26 aircraft movements have been attributed solely to Jabalpur. We are not only reviving the old routes despite the pandemic, but we are also commencing new routes.”

He further added, “Today, we are not only starting new routes and new flights from Jabalpur, we have also approved a 421 crore scheme for the development of Jabalpur airport. The new developments include construction of a new 10,000 sq ft terminal building, a new ATC tower, and extension of runway from 1950m to 2750 m to make it feasible for bigger aircraft operations.”

Jabalpur is the 69th domestic destination connected by M/s IndiGo airlines. These direct connections are aimed to enhance trade and commerce while also boost tourism in Jabalpur, especially at this time when Indians are increasingly looking towards domestic vacations and unexplored gems in the country.