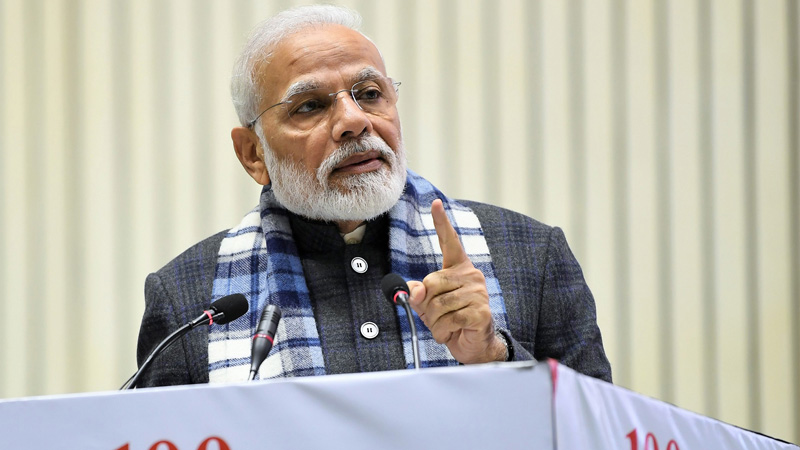 He was participating at the inaugural session of the Hundred Years of ASSOCHAM in New Delhi .

Addressing a gathering of leaders from the Corporate World, Diplomats and others, the Prime Minister said that the idea of making India a 5 Trillion Dollar worth economy is not a sudden one.

He said that in the past five years the country had made itself so strong that it not only could set for itself such a target but also make efforts in that direction.

“Five years before, the economy was heading for disaster. Our Government not only stopped this but also brought in a discipline in the economy”

“We brought in fundamental changes in India’s Economy so that it can run with set rules in a disciplined manner. We have met with the decades old demands of the Industrial Sector and we have built a strong foundation for a 5 Trillion Dollar Economy”

He said, “We are building the Indian Economy on two strong pillars of formalisation and modernisation. We are trying to bring in more and more sectors into the horizon of formal economy. Along with this we are linking our economy with latest technology so that we can speed up the process of modernisation”

“Now instead of several weeks it merely takes a few hours to register a new company. Automation is helping quick Trading across borders. Better linking of Infrastructure is reducing the turn-around time at Ports and Airports. And these are all examples of a modern economy. “

“Today we have a Government that listens to the Industry, understands its needs and which is sensitive to its suggestions.

Prime Minister said that the country could make a significant jump in the rankings of Ease of Doing Business due to a sustained effort.

“Ease of Doing Business may sound just like four words, but in order to improve its rankings there is a lot of effort that goes into it including changing the policies and rules at the ground level”

Prime Minister also emphasised the efforts being made towards a faceless Tax Administration in the country in order to reduce the human interface between the tax payer and the authorities.

“In order to bring about transparency, efficiency and accountability in the Tax System, we are moving towards a faceless Tax Administration”, he said.

Prime Minister said that the Government has decriminalised several laws in the Corporate Sector in order to reduce the burden and allow the industry to function in a fearless ecosystem.

“You know that there were several provisions of the Company Act as per which even small deviations were also dealt as a Criminal Offence. Our Government has now decriminalised many such provisions. And we are trying decriminalise many other provisions.”

Prime Minister said that the Corporate Tax at this time in the country is the lowest ever and this would propel a boost in the economic growth.

Prime Minister also spoke about the efforts being made towards bringing about Labour Reforms.

He also spoke about the sweeping reforms in the Banking Sector to make it more transparent and profitable.

“Owing to the steps taken by the Government today 13 Banks are on the path of profit which 6 banks are out of PCA. We have also hastened the process of unification of the Banks. Today banks are expanding their countrywide networks and are in the direction of achieving Global recognition”