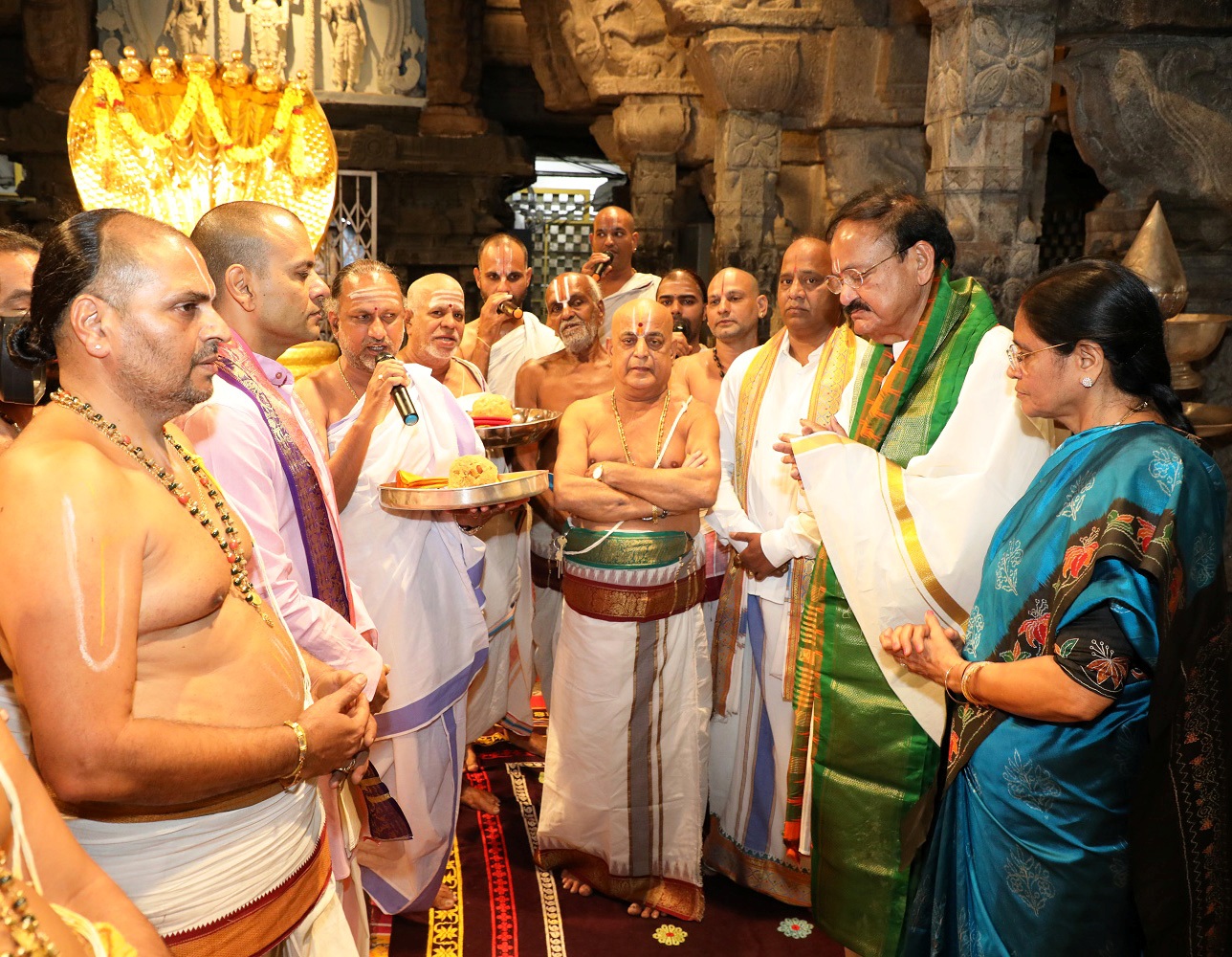 The Vice President of India, Shri M. Venkaiah Naidu has visited Vekateswara Veda Vigyana Peetham run by Tirumala Tirupati Devasthanams (TTD), at Tirumala today, and called for translating Vedas into various Indian languages in a simplified manner for the common man to understand their importance.

Addressing the students and the teachers of the Peetham, the Vice President described Vedas as a veritable treasure house of knowledge and said they reflect India’s age-old traditions and culture. There was a need to protect, preserve and propagate the scientific knowledge contained in the Vedas on various aspects of life and bring them within the reach of the common man, he added.

Shri Naidu said that Vedas were not mere religious texts but contain knowledge of various disciplines such as mathematics, astronomy, agriculture, chemistry and metallurgy.

Observing that Vedas could provide solutions to the most complex problems and challenges of the modern-day world, the Vice President called for taking up research on the knowledge contained in Vedas. He expressed his anguish that this aspect was not being paid adequate attention in India, while countries like Germany were undertaking extensive research.

Describing the students of the Veda Peetham as modern day Rishis, he expressed confidence that they would preserve and propagate the invaluable treasure of Vedas. Claiming that Guru-Sishiya parampara was a proud heritage of Sanathana Dharma, he said that learning of Vedas exemplifies this noble tradition.

The Vice President said that TTD funds should be used exclusively for propagating  Sanathana Dharma and providing facilities to pilgrims, but not for any other purpose.

Later the Vice President, his spouse, Smt. Ushamma and other family members along with other devotees had Annaprasadam under Nithyannadana programme run by TTD. He expressed his appreciation to TTD for conducting such a massive ánnadaana’ programme on a daily basis for thousands of devotees.

In the evening, he witnessed a literary recital by Shri Medasani Mohan.

Well-known exponent of Annamacharaya Keertanas, Sri Garimella Balakrishna Prasad rendered several Annamacharya’s compositions exclusively for the Vice President and his team. Subsequently, along with several devotees, he also witnessed “Nadaneerajan Programme”-offering of devotional music and dance to Lord Venkateshwara. Observing that Telugu literary forms like Avadhaanam and devotional music were invaluable heritage, the Vice President emphasized the need to preserve and propagate them.