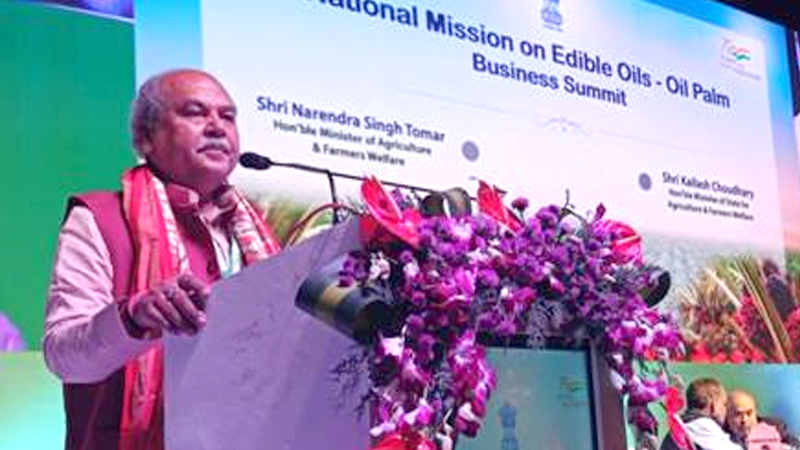 The National Mission on Edible Oil- Oil Palm Business Summit for states other than North Eastern States was inaugurated in Hyderabad today by the Union Minister of Agriculture Shri Narendra Singh Tomar. Aimingto give wide spread information on newly launched centrally sponsored scheme on edible oils, the Government is organizing business summits across the country.This is the second such summit of the Mission, the first was held in Guwahati for North Eastern states in early October this year. 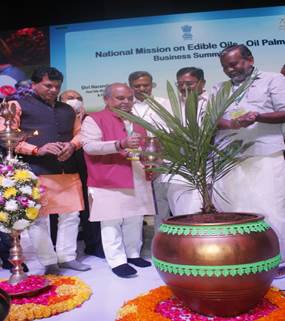 Addressing the Business Summit, the Union Agriculture Minister Shri Narendra Singh Tomar assured all the state governments that there will be no shortage of resources for the successful implementation of the National Mission on Edible Oil – Oil Palm. Shri Tomar said that under the leadership of PM Shri NarendraModi, the Government wants to make India self-reliant in the field of palm oil. “Currently about 3 lakh hectares ofland is under palm oil cultivation while studies have shown that about 28 lakh hectaresof land is suitable for the oil palm cultivation in the country. It is our mission to bring 28-lakh hectares of landunder cultivation to make India Aatmanirbhar in edible oil”, said Shri Tomar.

Shri Tomar expressed happiness at the progress made under National Mission on Edible Oils – Oil Palm since the first Business Summit.  The Centre has signed MoU with nine state governments for Viability Gap Payment, finalized revised Annual Action Plans of 11 states incorporating new provisions of Mission and organized National Workshop on Oil Palm in Arunachal Pradesh as sub-theme of Crop Diversification Programme. AAPs of 11 eleven states worth Rs 106.90 crore were approved for area expansion in 6563 ha, replanting 3058 ha maintenance and intercropping in 25197 ha of existing and new oil palm orchards and drip irrigation facility in 1569 ha of palm orchards. 4 Processing Mills will be established in NE states with subsidy from the Mission. In addition, 3 seed gardens and 39 nurseries will be created for increasing availability of seed sprouts and seedlings. Vermicompost sheds (360 nos) for production of quality organic manure and custom hiring centres (18 nos) for renting garden tools will also be made operational in the current year. Further, a meeting was held with Indian Ambassadors of major oil palm sprouts exporting countries to ensure uninterrupted supply of quality planting materials in large quantity.

Union Minister of State for Agriculture and Farmers’ Welfare ShriKailashChoudhary said “at present, we have to import edible oil. Today’s business summit will prove to be important to find a solution to this import.” Expressing his confidence in Mission, he said that with the help of scientists’ research, farmers’ hard work and the government’s support, this mission will achieve its target and will make a significant contribution in making India self-reliant.In order to boost the edible oils’ production, remunerative prices and assured procurement of oilseed crops is being done by the Government, he added.

Shri S. Niranjan Reddy, Minister of Agriculture and allied Sectors, Govt of Telangana highlighted the effort of TelanganaGovt for promoting oil palm plantation in the state and providing higher price to farmers for the FFBs (Fresh Fruit Bunches) of oil palm. Telangana state has drawn ambitious plan for oil palm expansion. Shri P. Prasad, Minister of Agriculture, Govt of Kerala, shared that the Kerala government is alsoemphasizing the  on promotion of oil palm in the state.

Distribution of registration certificates for the Farmer Producing Organizations (FPOs) were also done on the occasion. Earlier, Secretary Agriculture, Shri Sanjay Agarwal set the tone for the summit by outlining the vision of the government. The Mission has been planned very meticulously to address the issues affecting farmers, processors and state government.  Major emphasis has been given on arranging supply of planting material, timely procurement by processors and remunerative price for FFBs (Fresh Fruit Bunches) to farmers. He explained that potential regions delineated on the basis of land and climatic conditions are capable of producing higher yields of oil palm without any adverse impact of environment. Intercropping of other crops with oil palm will further conserve soil and water and sequester more carbon to mitigate climate change.

Chief Secretary of Telangana, Shri Somesh Kumar expressed hope that the state would emerge as the largest oil-palm producing area in the country in 3-4 years. He outlined the state initiatives in this regard saying that Telangana has notified 26 districts for oil palm cultivation and 11 oil processors are operating in the state. The targets of 5 lakh hectares’ plantation have been set for year 2022-23.  Indent has been placed for 324 lakh seed sprouts and 1045 hectare’s land procured for seed nursery and 23 nurseries have been established.