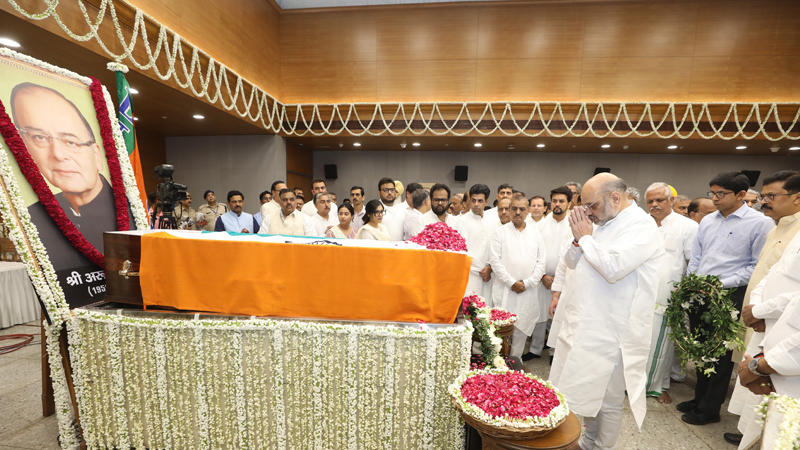 Union Minister for Home Affairs, Shri Amit Shah has expressed profound sorrow at the passing away of Former Cabinet Minister Shri Arun Jaitley, today. He said, “I am deeply saddened by the untimely demise of Shri Arun Jaitley. His passing away is a personal loss for me. I have lost not only a senior leader of the organization but also an integral member of the family, whose support and guidance I have been receiving for years. Today his departure has brought a void in the country’s politics and the Bharatiya Janata Party, which is not possible to be replenished soon”.

The Home Minister further said, “With his unique experience and rare ability, Arun ji served various responsibilities in the party and the government. A brilliant orator and dedicated activist, he held important positions like the country’s Finance Minister, Defence Minister and Leader of Opposition in the Rajya Sabha”.

“Arunji has left an indelible mark as the Finance Minister of the country during the NDA Government’s 2014-19 tenure by implementing Prime Minister’s vision for welfare of the poor on ground and placing India as the world’s fastest growing economy. He was a people-oriented person and always thought for the welfare of the common man. His every decision reflects this quality – be it the matter of taking action on black money or of realizing the dream of ‘GST – One Nation, One Tax’ or be it demonetization. The country will always remember him for his very simple and sensitive personality”, Shri Amit Shah said.