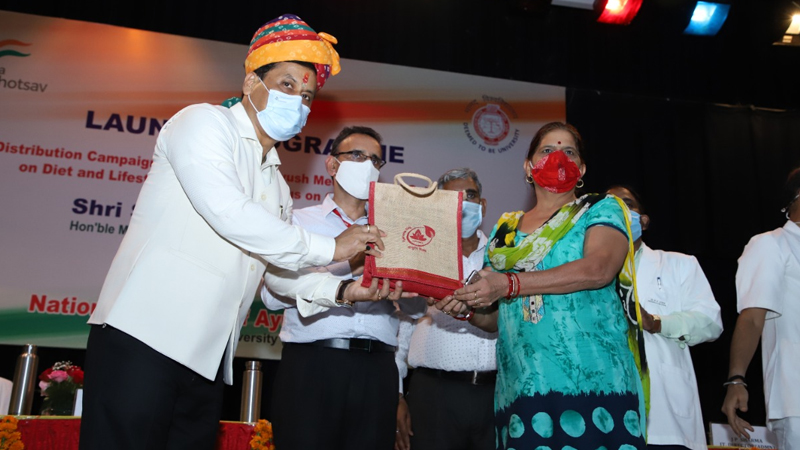 Minister of Ayush and Port, Shipping & Waterways Shri Sarbananda Sonowal launched a campaign of distributing Ayush prophylactic medicines and written guidelines on diet and lifestyle at National Institute of Ayurveda (NIA), Jaipur as part of ‘Azadi Ka Amrit Mahotsav’. The campaign will see the distribution of Sanshamani Vati, which is also known as Guduchi or Giloy Ghan Vati, and Ashwagandha Ghan Vati to 75 lakh people across the country, with special focus on geriatric (people of 60 years and above age) population and the front-line workers in the next one year.

Addressing the gathering, Shri Sonowal emphasized on the importance of spreading the message of Ayurveda across the country so that everyone can adopt it as a part if their lifestyle and achieve the aim of a healthy nation.

The Union Minister also urged the entire Ayurveda fraternity to join hands and work together so India could lead the world through its ancient wisdom of Ayurveda and Yoga.

The Union Minister also visited the NIA hospital where he interacted with students and the hospital staff. He was particularly impressed by the hygiene and cleanliness at the hospital. The kit of Ayurveda prophylactic medicines and the guidelines have been prepared by the Central Council for Research in Ayurvedic Medicines (CCRAS).

The drive to distribute prophylactic medicines and diet and lifestyle guidelines is a part of the ongoing ‘Azadi Ka Amrit Mahotsav’ campaign launched by the Government of India to commemorate 75 years of India’s freedom. The year-long campaign will continue till August 2022 when India celebrates 75th anniversary of Independence.

The Ministry of Ayush has been allotted one week from 30th August to 5th September, 2021 for promotion of several activities including the launch of Y-Break mobile application, distribution of medicinal plants for farmers and public and various webinars.