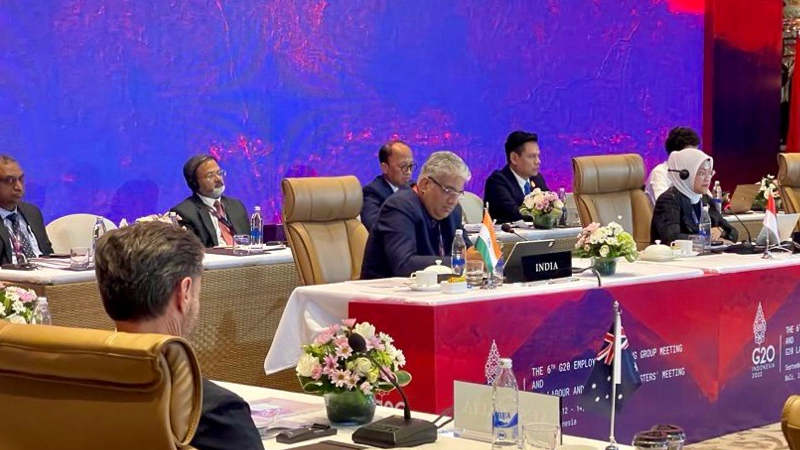 Speaking at the Ministerial session, Union Minister spoke about the importance of countries to come together for promotion of responsive and robust policies relating to employment generation, social protection, skilling and formalization, in the post pandemic period for ensuring a more resilient, equitable and sustainable recovery.

The Union Minister also commended Indonesia for selecting the priority areas which are critical in the ever changing world of work. These are, Labour Market Integration of Persons with Disabilities, Sustainable Growth and Productivity in Human Capacity Development through Strengthening Community Based Vocational Training, Promoting Entrepreneurship and Supporting Small and Medium Enterprises (SME) as a Job Creation Instrument and Adapting Labour Protection for More Effective Protection and Increased Resilience for All Workers. Union Minister also drew the attention towards the exemplary achievements of India in all these areas. He highlighted the provisions made in the social security code for providing social security to the gig and platform workers. He further emphasized that the skill development is being aligned to the need of future of work. He said that the experiences gained from this year’ G20 Employment Working Group meetings would aid India in its upcoming presidency and would  contribute to our pursuit of securing labour welfare, in light of the dynamic nature of the 21st Century world of work.

Union Minister also held several bilateral meetings with Countries including Germany, Singapore, UAE, Kingdom of Saudi Arabia, Netherlands, and Turkiye. In all these meetings, Minister briefed on our upcoming Presidency and broad priorities and sought the support of these Countries and Organizations for our goals. Need for signing of Migration and Mobility Agreement and Social Security Agreement at the earliest was highlighted for facilitating ease of mobility and for ensuring social security to the international workers.