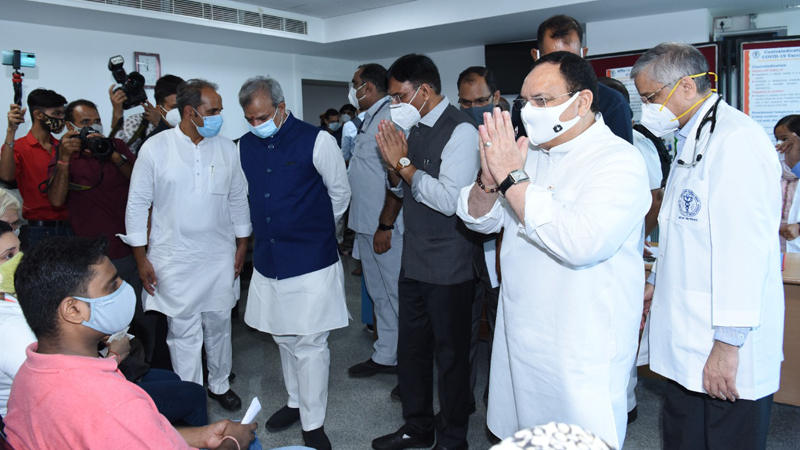 The Bharatiya Janata Party National President Shri Jagat Prakash Nadda ji today visited the All India Institute of Medical Sciences (AIIMS) at New Delhi and inspected the Corona vaccination centre. He took stock of the preparedness at the vaccination centre and the ongoing vaccination drive. He also spoke to people who had come for vaccination at the Centre and took their feedback. Significantly, this is the second such visit of the Bharatiya Janata Party National President to the AIIMS to conduct suprise inspection of the ongoing vaccination drive at AIIMS. He had also earlier visited the Dr Ram Manohar Lohia Hospital in New Delhi on June 21 where he had inspected a vaccination centre on the occasion of the Prime Minister Shri Narendra Modi ji’s historic decision to open the Corona vaccination drive free if cost for the people above 18 years of age across India. In today’s programme at the AIIMS, Shri Nadda was accompanied by the Union Health Minister Shri Mansukh Mandavia, AIIMS Director Dr Randeep Guleria and the BJP Delhi State unit president Shri Adesh Gupta.

The Bharatiya Janata Party National President said that India in a very short span has administered 84 vaccine shots which is highest in the world. On September 17, the birthday of our Honourable Prime Minister Shri Narendra Modi ji, all records of vaccination were broken when over 2.5 crore people were given vaccine doses across India. Our team working on the vaccination drive made the drive successful and

created a world record. For this, I congratulate and thank Union Health Minister Shri Mansukh Mandavia and his entire team, Dr Randeep Guleria and his team, our frontline health workers, staff nurses, doctors, paramedics and the entire medical fraternity.

Making a scathing attack on the Opposition parties, Shri Nadda said, on September 17 when over 2.5 crore vaccine doses were administered on a single day, the entire Opposition remained mum and did not say a word, which in itself raises many questions. In the past one year the manner in which the Opposition parties have given highly irresponsible and negative statements regarding the Corona vaccination drive and even conspired to derail our vaccination programme and drive, and tried to defame and malign the image of India globally is highly condemnable and very unfortunate. These Opposition parties should do some serious self introspection and say sorry to the people of India.

The BJP National President said that the Opposition parties raised objections and cast aspersions at a crucial time when the entire country under the leadership and guidance of Honourable Prime Minister Shri Narendra Modi ji was wholeheartedly supporting the pan India vaccination drive and also making it a big success. Shri Nadda said all these Opposition parties should think that how their negative campaign and false propaganda maligned the image of India on the global front? It is important for the Opposition parties to introspect and ponder what is their relevance and importance left in the Indian democracy after such a highly negative and divisive agenda and acts?

The BJP National President said that the manner in which the people of India has unitedly made all programmes during the Corona pandemic a huge success including the wide vaccination drive. I thank and congratulate the people of my country for their cooperation and support.