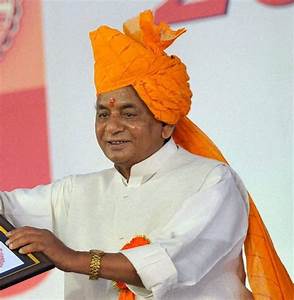 BJP senior leader and former Chief Minister of Uttar Pradesh Shri Kalyan Singh, who was ailing for some time, breathed his last on 21 August at the Sanjay Gandhi Post Graduate Institute of Medical Sciences in Luck now at around 9.30pm. He was 89 years old. Several leaders across the political spectrum expressed their heartfelt tribute on the demise of Shri Kalyan Singh.

Prime Minister Shri Narendra Modi expressing his condolence said in a tweet, “I am saddened beyond words. Kalyan Singh Ji…statesman, veteran administrator, grassroots level leader and great human. He leaves behind an indelible contribution towards the development of Uttar Pradesh. Spoke to his son Shri Rajveer Singh and expressed condolences. Om Shanti.”

BJP senior leader and former Deputy Prime Minister Shri L.K Advani also issued condolence message on demise of the leader. He said in a press statement, “I am deeply saddened to condole the passing away of my close associate Kalyan Singh ji, former Chief Minister of Uttar Pradesh.

A stalwart of Indian politics and a grassroots leader, Kalyan Singh ji became the Chief Minister of the first ever BJP government of Uttar Pradesh. He endeared himself to the masses by working tirelessly for the upliftment of the weaker sections and contributed greatly to the overall progress of the state.”

He added, “I cherish my many special memories with him during the Ram Janmabhoomi Movement. His commitment, drive and sincerity towards resolving the Ayodhya issue was a great source of strength not only for my party, the BJP, but for scores of Indians who were eagerly waiting to see the realisation of their dream of a grand temple of Lord Ram at Ramjanmabhoomi. Kalyan Singh ji’s demise has left a huge void. His selfless persona will continue to inspire many generations of Indians. May his soul rest in peace. My heartfelt condolences to members of his family and admirers. Om Shanti.”

Union Minister Shri Amit Shah said Shri Singh had dedicated his life to the nation. Shri Shah said, “The country and the entire BJP family are mourning his death. This nation and future generations will always be indebted for his immense contribution,” he said.

Describing Kalyan Singh as a stalwart of Indian politics,  Union Defence Minister Shri Rajnath Singh said with his demise, he has lost his elder brother and a companion. “Kalyan Singh’s death is a great loss for Indian politics and a very sad moment for me,” he said in a tweet.

Addressing the reporters Shri Adityanath said, “Three-day state mourning will be declared to condole the demise of Kalyan Singh. His last rites will be performed on the bank of Ganga in Narora in the evening on August 23. There will be a public holiday on August 23.”

“In Indian politics, he was synonymous with purity, transparency and public service. The death of such a respected organiser and popular mass leader Kalyan Singh ji is an irreparable loss for the entire nation,” Adityanath said in a tweet.