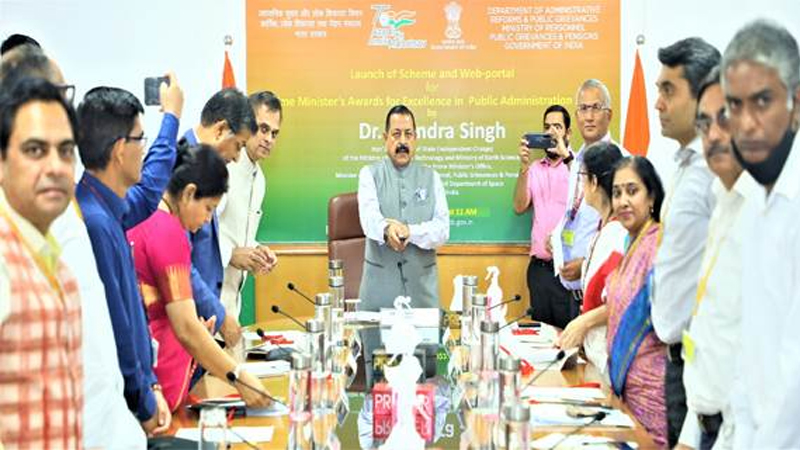 The formal launching was organised by the Department of Administrative Reforms & Public Grievances, Union Ministry of Personnel, at Sardar Patel Bhavan in New Delhi..

Principal Secretaries (AR)/(IT) and DCs/DMs of all the 28 States and 8 UTs of India as well as Assistant Secretaries of 2020 Batch were invited for the launch ceremony in hybrid mode.

Speaking on the occasion, Dr Jitendra Singh said, under the leadership of Prime Minister Narendra Modi, the entire concept and format of the PM Excellence Awards has undergone a revolutionary change after 2014. The objective of the Scheme is to encourage constructive competition, innovation, replication and institutionalisation of best practices.

The PM’s Awards, 2022 will consist of: (i) Trophy, (ii) Scroll and (iii) an incentive of Rs 20 lakh to the awarded District/organisation to be utilised for implementation of project/programme or bridging resources gaps in any area of public welfare.

The Period of consideration is 1st April 2020 to 30thSeptember, 2022. The total number of Awards under the Prime Minister’s Awards for Excellence in Public Administration 2022 would be 16.

Under this approach, the emphasis would be on good governance, qualitative achievement and last mile connectivity, rather than only on achievement of quantitative targets. With this focus, the applications for Awards would be evaluated on three parameters, Good Governance, Qualitative and Quantitative, the Minister said.

Dr Jitendra Singh recalled that during his address on Civil Services Day, 2022, Prime Minister Narendra Modi had emphasised to continuously create a perfect seamless mechanism to give due benefits to the last person. The more we build this mechanism, we can achieve the country’s mission of empowerment of the last person. Civil Services Day should become an opportunity to infuse new energy within us and to make new resolutions. We should handhold the new officers with new enthusiasm. Certain entrepreneurs from the district or who have been active in a particular district can be called to share their learning and experiences which can then be replicated as best practices. It is expected that all the districts participating in this scheme will get an opportunity to showcase their performance while competing for Prime Minister’s Award for Excellence in Public Administration 2022.

The criteria for evaluation of PM’s Awards, 2022 is based on predetermined indications in consultation with Line Ministries/Departments (excluding Innovation). There would be a mix of common parameters across schemes and flexible parameters which would be provided by the concerned Line Ministries/Departments. The award for Innovation category will be evaluated based on introducing and implementing an innovative idea/scheme/project to meet stakeholders’ requirements. The evaluation process would include (i) Short-listing of Districts/Organisations by Screening Committee (first and second stage), (ii) Evaluation by Expert Committee and (iii) Empowered Committee. Prime Minister’s approval will be taken on the recommendations of the Empowered Committee for Awards.