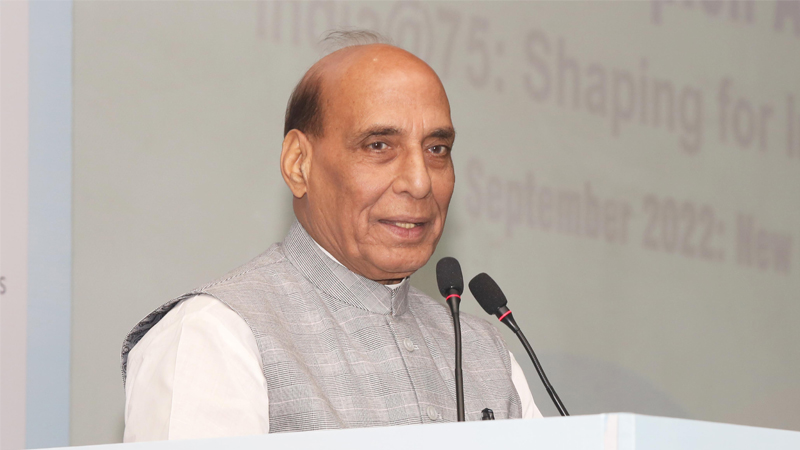 Raksha Mantri Shri Rajnath Singh has called upon the Indian defence industry to identify and manufacture state-of-the-art cost-effective products/technologies to realise Prime Minister Shri Narendra Modi’s vision of a ‘New India’ that not only caters to its own needs, but also fulfils international requirements. He was addressing the 5thAnnual Session of Society of Indian Defence Manufacturers (SIDM) in New Delhi on September 27, 2022.

Shri Rajnath Singh asserted that the Government fully understands the importance of a fool-proof security apparatus and is constantly working towards bolstering all dimensions of national security to take the country to greater heights. “Only a secure and strong nation can achieve the heights of success. No matter how rich or knowledgeable a nation is, its prosperity is threatened if national security is not ensured. We are focussing on national security and economic prosperity to make India one of the strongest countries in the world,” he said.

The Raksha Mantri stated that former Prime Minister Atal Bihari Vajpayee considered the private sector as a game-changer and the present government, led by Prime Minister Shri Narendra Modi, is carrying forward that vision with great zeal. He said, the number of reforms undertaken by Ministry of Defence in the last few years to increase private sector participation have created an enabling environment for defence companies to ensure the country’s holistic development as well as their own.

Shri Rajnath Singh listed out the steps taken to encourage the private sector, including earmarking 68 per cent of capital procurement budget for domestic industry in 2022-23, out of which, 25 per cent has been allocated for the private sector. In addition, 25 per cent of defence R&D budget has been earmarked for private industry and start-ups which will pave the way for innovation of new defence technologies in India. Other measures include issuance of positive indigenisation lists; unveiling of Defence Acquisition Procedure 2020; opening up of opportunities to build Mega Defence Programme including fighter aircraft, helicopters, tanks and submarines through a strategic partnership model and Innovations for Defence Excellence (iDEX) initiative which has created an ecosystem for innovation and technology development in defence and aerospace sectors.

The Raksha Mantri pointed out that the constantly-evolving global scenario has led to increase in demand for military equipment across the world, with countries focussing on bolstering their security systems. He urged the industry to take advantage of this current golden period of the Indian defence sector, exhorting them to further enhance their participation through increased investment in the two defence corridors set up in Uttar Pradesh and Tamil Nadu, with the aim to achieve the vision of ‘Aatmanirbhar Bharat’.

“According to a recent report of Stockholm International Peace Research Institute (SIPRI), in 2021, world military spending crossed US $2 trillion for the first time. It has increased by 0.7 per cent as compared to 2020 and 12 per cent as compared to 2012. Our armed forces will also spend a substantial amount on capital procurement in the years to come. This shows that the security needs of the world are set to increase. India is capable of meeting those needs, both in terms of quality and cost-effectiveness. Public sector, private sector, academia and research & development organisations, with SIDM as their nodal point, must continue to work together to achieve this objective,” said Shri Rajnath Singh.

The Raksha Mantri appreciated the fact the efforts made by the Government have started to yield positive results as there has been an increase in the number of contracts being awarded to the domestic industry. He added that as a result of the efforts, over 10,000 MSMEs have joined the defence sector, with an increase being witnessed in research & development, start-ups, innovation and employment.

On the recent surge in defence stocks, the Raksha Mantri stated that the increasing market valuation of the companies is a reflection of the trust of big investors, Services and the nation in the entities which are contributing to national security.

Terming SIDM as a bridge between the government & the industry, Shri Rajnath Singh urged the companies to approach the association with any queries & grievances, assuring all support of Ministry of Defence. He, however, also stressed that while there is a responsibility of the industry towards its balance sheet, it also has a responsibility towards the Nation. He called upon them take full care of the interests of all stakeholders, including making timely payment to MSMEs and vendors in their supply chain, promoting use of clean technologies and discharging Corporate Social Responsibilities.

The Raksha Mantri, while commending the growth of SIDM, stated that in just five years of its inception, about 500 members have joined the association, which is an indicator of the progress of the Indian defence industry. He described the expansion of SIDM outside Delhi as a reflection to the industry’s trust as well as the association’s resolve to protect the interests of the local companies, with the main aim of strengthening national security.

The 5thAnnual Session of SIDM was organised on the theme ‘India@75: Shaping for India@100’, with the aim to position India as one of the top countries in defence manufacturing. The session witnessed participation from the top leadership of the Ministry of Defence, Indian Armed Forces, Industry & Foreign Defence Attachés based in India. Chief of the Air StaffAir Chief Marshal VR Chaudhari, Vice Chief of the Naval Staff Vice Admiral SN Ghormade, Vice Chief of the Army StaffLt Gen BS Raju, President, SIDM Shri SP Shukla.

On the occasion, Shri Rajnath Singh felicitated the winners of the 2nd edition of SIDM Champions Award. Bharat Electronics Limited, Bharat Forge Ltd and Larsen & Toubro Ltd were among the winners who were felicitated in different categories such as Technology Innovation to address capability gaps, Import Substitution and Infrastructure for Design/Development &Testing.