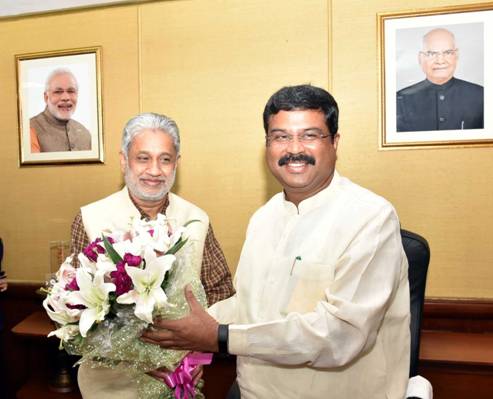 Shri Dharmendra Pradhan today took charge as the cabinet minister of the Petroleum and Natural Gas Ministry.  Shri Pradhan was administered the oath of office and secrecy by the President in a ceremony held at Rashtrapati Bhawan yesterday. Shri Pradhan was holding the charge of the same Ministry in the last government, after taking over in May 2014.

Speaking to the media after taking charge of the Ministry, Shri Dharmendra Pradhan expressed gratitude to the Hon’ble Prime Minister for reposing confidence in him. He said that a lot of reforms and initiatives have been undertaken in the last five years, which positively affected the people’s lives. Last five years saw the Government traversing a successful path of overall economic journey, and the people of the country have given more responsibility to the Prime Minister. He said that our team worked relentlessly in the last five years, and in the future also, we will take up the responsibility as a challenge and work even harder. Shri Pradhan said that increasing domestic oil and gas production will be our priority. The reforms of the last five years have started yielding results, and we will be focussingmore on them. Setting up of common infrastructure, market friendly infrastructure is on the top of the Government’s agenda. Work is going on speedily on setting up of gas grid, PM Urja Ganga project and setting of CGD network and that will be further expedited.  We have given emphasis on promoting bio-fuels, work is being done in this direction and it will gain more momentum in the days to come. The Minister said that work which has been done in the recent past, will be taken ahead in a comprehensive and coordinated manner.  We are starting a new innings, with a new energy and new spirit. Our team has gained a lot from the prime Minister’s vision and leadership. Energy has become an international diplomacy handle, and many countries look towards India. Shri Narendra Modi is seen as a spokesperson of world consumers, and this has been acknowledged by the world. He said that the Ministry will take inputs from all concerned in formulating the policies.