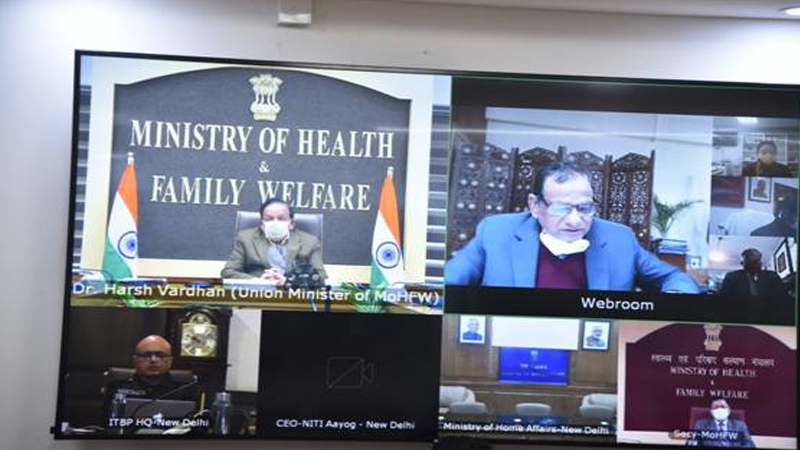 Dr. Harsh Vardhan began the meeting by reminding everyone that the Group of Ministers constituted for management of COVID has been operational now for over a year: “The first case was reported on 30th January last year, and the first meeting of the GOM constituted for COVID19 met on 3rd February 2020. With the ‘Whole of Government’ and ‘Whole-of-society’ approach envisaged by Prime Minister Shri Narendra Modi ji, India has successfully contained the pandemic. Less than 12,000 cases were reported in the last 24 hours and the Active Caseload has reduced to just 1.73 lakhs.”

He added that out of the total active cases, a meagre 0.46% are on ventilators, 2.20% are in ICU and just 3.02% are on oxygen support. Dr Harsh Vardhan stated that 165 cases of UK Variant have been reported so far. They are kept under supervised quarantine and surveillance.

The Union Health Minister proudly mentioned that India has supported other countries with supply of the COVID19 vaccine during such global public health crisis, and trained the personnel of several countries in vaccine administration. “By being a “mitra” to the global community, India has earned global trust by supplying indigenously made vaccines at this crucial hour”, Dr Harsh Vardhan said.

Dr. Sujeet K Singh, Director (NCDC) presented a detailed report on the current and future scenario of COVID-19 in India drawing comparison with the trajectory of the confirmed cases and growth rates of COVID-19 in other countries of the world. India has reported 7 Day Growth Rate of 0.90%, lowest amongst the world, he stated. He presented a granular analysis of the trajectory of the pandemic in India pointing out critical parameters like day-wise confirmed new cases with growth rate %, recovery rate, case positivity rate, trend of active cases, concentration of cases in particular districts and other trends like fatality, and spread of new UK variant cases across different states in India. India’s Case Fatality Ratio is showing a declining trend from 3.4% in mid-June 2020 to the current rate of 1.4% due to effective clinical management. He also informed that Dadra and Nagar Haveli and Daman and Diu has the highest recovery rate of 99.79% followed by Arunachal Pradesh (99.58%) and Odisha (99.07%) while Kerala has recovery rate of 91.61% because of its present high active caseload. He informed that Mumbai, Thiruvananthapuram, Ernakulam, Kottayam and Kozhikode remain the top 5 districts reporting highest number of active cases currently. Maharashtra and Kerala are contributing 70% of the active caseload of the country at the moment. He advised caution in the coming months based on the nature of transmission being witnessed in other countries and because of the mutant strain of the virus being reported throughout the world.

Through a detailed presentation, Dr. Vinod K Paul, NITI Aayog and Shri Rajesh Bhushan, Union Health Secretary apprised the GoM on the progress of development of vaccines in the country and the Vaccination Drive which was launched by the Prime Minister on 16th Jan 2021.

The Union Health Secretary showcased the logistics of the vaccination exercise and the gains made so far; 112.4 lakh doses of vaccines were distributed to States/UTs within 3 days (from 12th to 14th Jan 2021) prior to the start of the exercise; another additional 115.6 lakh doses to States/UTs were completed on 20th Jan 2021; 69,000 Programme Managers, 2.5 lakh vaccinators & 4.4 lakh other team members are trained so far; 93,76,030 health care workers and 53,94,098 frontline workers are now registered on the Co-WIN portal. He also updated on the communication strategies employed in co-ordination with the States and UTs to counter misinformation and rumour mongering.

Dr. Paul informed that India currently stands 6th in providing Vaccination coverage and will soon move to the 3rd place in the next few days; 16 AEFI hospitalizations out of 23 lakh vaccinations so far translate to just 0.0007% with no case of severe/serious AEFI or death due to vaccination reported so far. He also apprised the GoM on how India’s daily new cases trajectory compare favourably to the rest of the world.

The GoM discussed issues regarding balancing domestic requirements vis-à-vis requests from other countries for Indian vaccines. Ms. S Aparna, Secretary, Department of Pharmaceuticals, and Head of the Sub-group within NEGVAC formed for these issues, apprised the GoM on the actions taken in this regard.