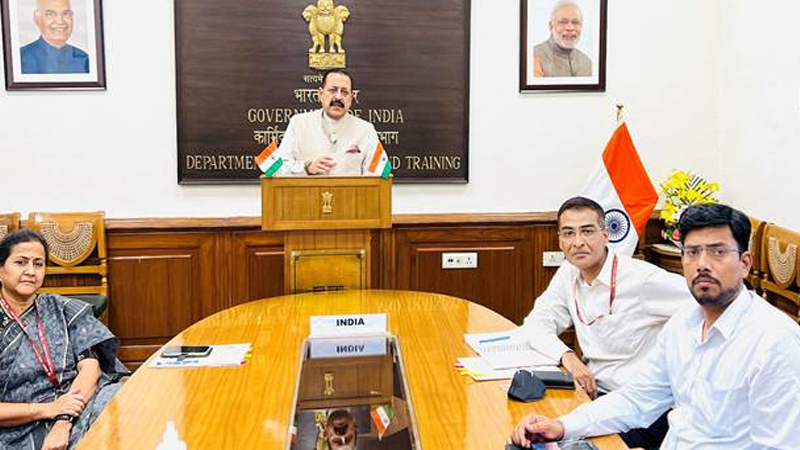 India today reiterated its commitment against corruption and said that Prime Minister Shri Narendra Modi has adopted a policy of zero tolerance in this regard.

Addressing the BRICS Anti-Corruption Ministerial meet on behalf of India, Union Minister of State (Independent Charge) Science & Technology; Minister of State (Independent Charge) Earth Sciences; MoS PMO, Personnel, Public Grievances, Pensions, Atomic Energy and Space, Dr Jitendra Singh said, India under Modi is determined to continue its crusade against corruption and unaccounted money. In pursuance of this, he said, a range of initiatives have been taken by the Modi government over the last 8 years.

Dr Jitendra Singh referred to the India’s Prevention of Corruption Act, 1988, which the Modi government amended after 30 years in 2018 to introduce a number of new provisions including criminalizing the act of giving bribe also in addition to taking bribe and at the same time putting in place an effective deterrence for such actions by individuals as well as corporate entities. He also pointed out that the institution of Lokpal has been operationalized by appointment of Chairperson and Members. Lokpal is statutorily mandated to directly receive and process complaints as regards alleged offences against public servants under the Prevention of Corruption Act,1988.

Dr Jitendra Singh also pointed out that systemic improvements and reforms to provide transparent citizen-friendly services and disbursement of welfare benefits directly to the citizens under various schemes of the Government in a transparent manner through the Direct Benefit Transfer initiative checked the menace of corruption in a significant manner. He also added that the National e-Governance Services Delivery Assessment (NeSDA) framework which was conceptualized and launched in August 2018, assesses the effectiveness / quality of the e-Governance service delivery mechanism from the citizen’s perspective. Dr Jitendra Singh told the delegates that the Central Vigilance Commission in India is the nodal agency entrusted with the task of overseeing preventive and punitive measures. He listed various preventive measures like Leveraging Technology and automation, ensuring transparency, accountability and Integrity in public procurement, encouraging e-tendering and e-procurement practices, adoption of Integrity Pact and appointment of Independent External Monitors and advising exemplary punishment in all cases of proven misconduct to create deterrence, etc.

Dr Jitendra Singh thanked the Chinese Presidency for this initiative and expressed satisfaction over the successful finalization of the BRICS Denial of Safe Haven initiative and shared experiences at the BRICS Workshop on Anti-Corruption and Economic Development. They also focused on enhancing the use of criminal and non-criminal tools to combat corruption, including through cooperation on asset recovery.

Dwelling on the theme of BRICS cooperation to combat corruption, Dr Jitendra Singh highlighted few areas of future action like bringing in processes, where fugitive economic offenders can be traced and extradited faster, and their properties situated abroad brought within the reach of the law of the land from which such offenders escape. He also called for striving to prevent the transfer of proceeds of corruption overseas, and effectively implement the FATF Anti-Money Laundering and Counter Terrorism financing standards. The Minister underlined the need to develop common understanding on the return of persons and assets sought for such offences and endeavor to strengthen international cooperation against money laundering through enhanced exchange of knowledge between concerned national agencies. There is no second thought that the impact of economic offences, such as, money laundering, banking fraud, tax evasion, etc. on the economy of a country and the global economy is substantial, the Indian side noted.

Dr Jitendra Singh noted with satisfaction that despite COVID situation, BRICS countries have been able to achieve a lot during past few years. He said, with 2022 BRICS Anti-Corruption Ministerial Communique and Leaders Declarations, we are moving towards a well guided future. Under the capable leadership of South Africa, Brazil and Russia in the coming years, I am sure that BRICS countries would lead in anti-corruption cooperation and asset recovery, the Minister added.

Indian Minister recalled that in 2015, BRICS reaffirmed the joint commitment to fight against corruption by putting in place mechanisms which deny a safe haven to persons sought for corruption and for stashing Black money. He said, the members created this BRICS Anti-Corruption Working Group to have informal and open discussions on the issues related to combating and preventing corruption.

In his concluding remarks, Dr Jitendra Singh said, the Ministers and delegates are confident that the deliberations at this BRICS Anti-Corruption Ministerial Declaration will help in working out effective strategies to deal firmly with corruption, in all its forms and manifestations, including its links with terrorist financing.

It is evident that BRICS is an important group which brings together the major economies from the world. We comprise 41% of the world population, have 24% of the world GDP and share over 16% of the world trade. We BRICS countries are the main engines of global economic growth.