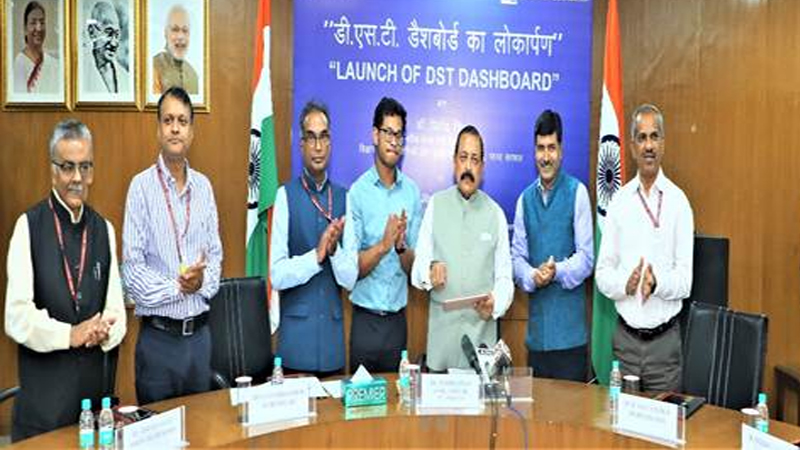 The Minister said, through the Dashboard, details of each of the schemes and programmes for any group in every State can be accessed on a real time basis and remedial measures, if any, can be taken promptly. He said, impact analysis of the schemes and scholarships both age wise and gender wise for SC/ST/OBCs and General Castes is embedded in the Dashboard for suggesting reformative measures to states, if any.

Harping on the idea of greater integration, Dr Jitendra Singh said, DST Dashboard is a good beginning and efforts would be made in future for a Common Dashboard for all Science Ministries and Departments. The Minister informed that in the last five years, over Rs 20,000 crore were disbursed by DST to 2,768 Agencies in 35 States/UTs and every single minute detail is available on the Dashboard.

Dr Jitendra Singh said, Dashboard is an institutional mechanism of the DST to drive the process of building, harnessing as well as augmenting and monitoring the statistical and data analytical capabilities of the Department. He said, this is in compliance to the directives of NITI Aayog issued in February 2021. The Minister, however, pointed out that DST had established a similar setup – Data Management Cell with the same objectives in January, 2019. Dr Jitendra Singh said, Data & Strategy Units (DSUs) creates different dashboards for different target groups and these dashboards have helped DST in taking evidence-based decisions. Many special calls have been taken on programmes seeing the gaps in the outreach of the programmes and in many programmes mid-course corrections have been prompted based on the data analysis done through dashboards, the Minister added.

The most important outcome of these dashboards is that the Department is made aware of the outputs and outcomes of the decisions taken, projects funded or scholarship/fellowship awarded on a regular basis and in a user-friendly manner.

Secretary, DST, Shri S. Chandrasekhar said, Data & Strategy Unit (DSU) is assisted by an Expert Advisory Group consisting of eminent data scientists from academia, public and private sector institutions. DSU also provides opportunity to budding data scientists by engaging them as interns. Ministries/Departments were advised to set up a Data & Strategy Unit (DSU) as a central unit to steer the development and implementation of an action plan or data strategy to improve their data preparedness levels in general and reach DGQI 5.0 scores by December, 2022 in specific.

Apart from data analysis and creating dashboards, Data & Strategy Unit of DST is also engaged in creating awareness on data by organising training programmes and workshops. DSU also invites eminent data scientists and data champions for lectures and interactions with the scientists, data officers and other officials of DST. A weekly thematic poster on the schemes/programmes of DST and on S&T topics in general with a QR code of the related dashboard is placed on important sites of Technology Bhawan to keep the Scientists and other officials aware of the schemes in an interactive way.