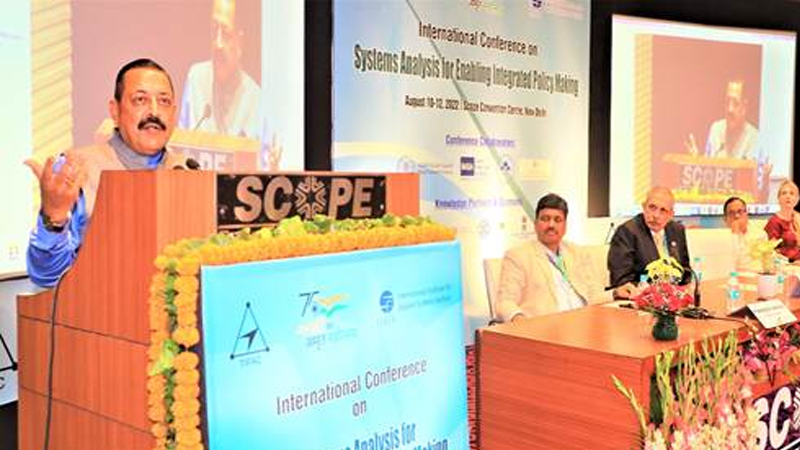 Dr Jitendra Singh said, under Prime Minister Modi, India has presented a roadmap to the world about the mitigation measures by building upon the principle of Common but Differentiated Responsibility (CBDR). He pointed out that India is committed to reducing its aggregate greenhouse gas emissions (GHGs) by one billion tonnes by 2030, decreasing its dependency on fossil fuels by 50 per cent of the total consumption in 2030; reducing carbon to GDP intensity by 45 per cent from the 2005 levels and making entire country carbon neutral by 2070.

The conference organised by the Technology Information, Forecasting & Assessment Council (TIFAC), an Autonomous Body under the Department of Science and Technology (DST)) in collaboration with International Institute for Applied Systems Analysis(IIASA) is being attended by around 1000 academicians, researchers, practitioners, government officials, IIASA representatives, policy planners from diverse disciplines are formulating ideas and identifying complex issues of climate change, pollution, clean energy, livelihood, and digitalization widely shared by countries across Asia at the three day event.

The Minister said, India has been traditionally vulnerable to natural disasters on account of its unique geo-climate conditions. Floods, droughts, cyclones, earthquakes, and landslides have been a recurrent phenomenon, but recent events have become erratic with an unpredictable frequency and intensity that are being attributed to climate change. The Minister, however added that India being a leader in disaster management, the world looks up to us for global challenges such as climate change. 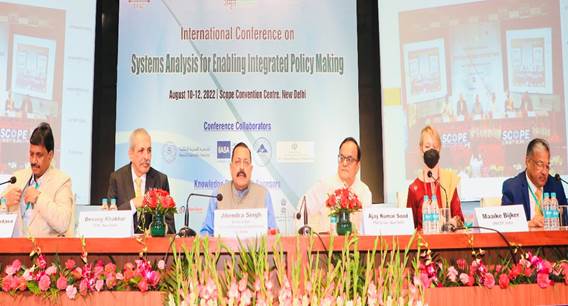 Dwelling on historical perspective, Dr Jitendra Singh said, since the turn of the 20th century the global average temperature has risen, sea levels have increased, the oceans have warmed and become more acidic, land and sea ice has melted, and the atmospheric carbon dioxide level has increased. He said, it is widely felt that human activities are largely the cause of climate change and these may lead to Food insecurity and Water scarcity: Similarly, disaster and climate change events have led to increased or decreased precipitation that have impacted the water supplies leading to scarcity or flooding or stagnation, the Minister added.

Dr Jitendra Singh underlined that the battle against this mammoth climate change cannot be fought alone and the scientific communities need to talk in harmony toward a shared goal of mitigating climate change and achieving Sustainable Development Goals (SDGs).

The Minister called for building up strong regional collaboration for systems research and design policy directives with collective efforts to deal with climate Change.

Dr Jitendra Singh told the gathering that COVID-19 brought forth the inherent resilience and capabilities, as when the pandemic hit, there was hardly any PPE kits, adequate masks or treatment protocols, but under Modi’s vision India successfully came up with 2 indigenously developed vaccines – Covaxin and Covishield in a short span of time and thereafter developed the DNA vaccine.

Dr Jitendra Singh concluded that this is indeed a proud moment for India to host this very important Conference on systems analysis as it coincides with India’s 75th year of Independence, which is popularly celebrated as Azadi Ka Amrit Mahotsav. He also hoped that the deliberations in the form of panel discussions, plenaries and talks, the scientific community will enrich itself with the discussions in different domains of Systems analysis and would further strengthen the collective resolve for a sustainable future.

Principal Scientific Adviser to the Government of India Professor Ajay K Sood underlined that new integrated approaches and tools were needed to tackle the unprecedented challenges that humanity was facing.  He added that the future challenges like climate change, food security required collective robust system to mitigate the emerging challenges & long-lasting solutions and hoped that the workshop would bring new ideas, vision for a less vulnerable world.

Representatives from Ministry of Earth Sciences, Ministry of Environment, Forest and Climate Change, Ministry of Agriculture and Farmers Welfare, Ministry of Jal Shakti and others as well as delegates from premier institutes like Deutsche Gesellschaft für Internationale Zusammenarbeit (GIZ) GmbH, from United Nations Development Programme (UNDP), World Resources Institute (WRI) and Asian And Pacific Centre for Transfer of Technology (APCTT) are also providing insights into various themes of the conference.