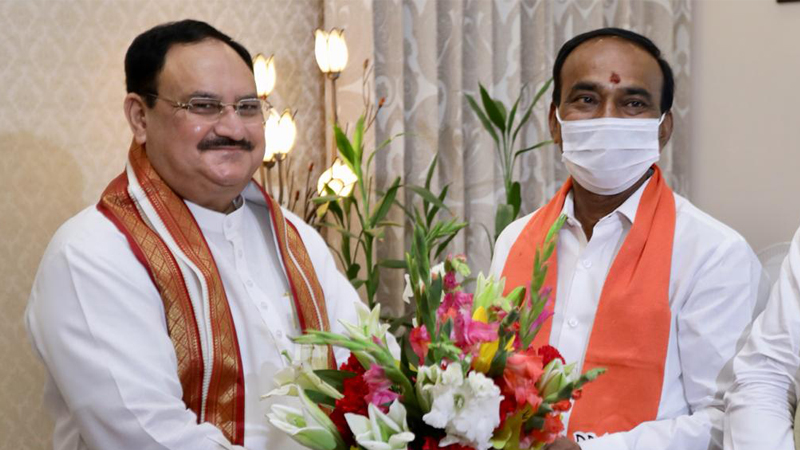 Addressing the press conference on the occasion, Union Minister Shri Dharmendra Pradhan said, Shri Etala ji is a very important figure in the southern political sphere. In the next Assembly elections, the BJP will emerge victorious and form the government in the state.

Welcoming Etala to the party, BJP general secretary Tarun Chugh said, “Shri Etala ji is a very eminent face in Telangana. He was a founding member of TRS. We gladly welcome him and the other leaders into our party.”

Shri Etala Rajender, speaking in the press conference after joining BJP, said : “I will work with all enthusiasm and make Bharatiya Janata Party victorious in Telangana. I will work towards the betterment of the people as I have till now and will not let them down”. He expressed full faith in the development journey of Hon’ble Prime Minister, Shri Narendra Modi ji and said that the country has written a new story of development and progress under the leadership of Shri Modi ji.

“I along with millions of people of this country have great hopes in the BJP under the esteemed leadership of the Prime Minister Sh Narendra Modi ji. I will work like an ordinary BJP worker and do my best for the party. Whatever responsibility the party gives, I will fulfill it with sincerity and full dedication,” he added.

He also thanked Hon’ble National President, Shri Jagat Prakash Nadda ji for giving him an opportunity in the Bharatiya Janata Party to serve the people.