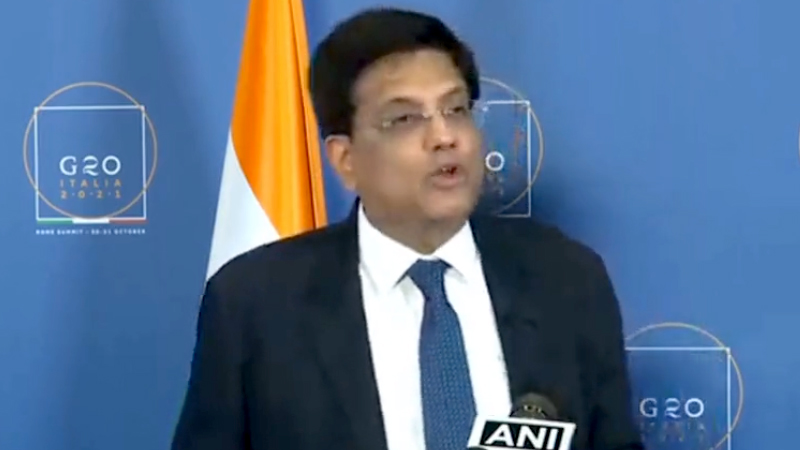 Minister for Commerce and Industry, Consumer Affairs, Food and Public Distribution and Textiles, Shri Piyush Goyal, today said that India will continue to be a voice for the common citizen of developing countries and emerging market economies in the G20.

He was briefing the media on the outcomes of Prime Minister, Shri Narendra Modi’s participation in the recently concluded 16th G20 Summit, in Italy today.

This was the Prime Minister’s 8th G20 Summit since 2014 and 1st in-person Summit since the Osaka Summit in 2019. The theme of Summit under Italian Presidency was ‘People, Planet, Prosperity’, with an overarching theme of recovery from the pandemic across pillars of health, economy, employment & education & tourism, and climate action.

The Prime Minister participated in all 3 Summit Sessions- on Global Economy and Global Health; Climate Change and Environment and Sustainable Development. The Leaders adopted the Rome Declaration at the Summit.

Shri Piyush Goyal expressed his satisfaction at the recognition of COVID-19 immunization as a  global public good by the G20, and at the extension of G20 Debt Suspension Service Initiative (DSSI) till the end of this year, which would result in debt deferment of  $ 12.7 bn between May 2020 and Dec 2021, benefitting 50 countries.

Speaking of Agriculture, Shri Goyal said that India had pushed and obtained consensus on improving the livelihoods of small and marginal farmers.
On energy and climate, instead of only focusing on the climate goals, India along with other developing countries was able to introduce language on what actions need to be taken including by developed countries to achieve these goals.

For the 1st time, the G20 identified sustainable & responsible consumption & production, along with provision of finance & tech as “critical enablers” for achieving climate goals of keeping 1.5 degrees within reach

This is line with PM’s vision of promoting the mantra of sustainable lifestyles all over the world. Sustainable consumption and responsible production patterns is coming from SDG 12, and is aimed at encouraging developed countries to reduce their luxurious energy intensive lifestyles

Shri Goyal said that India has pushed for the inclusion of the principle of Common but Differentiated Responsibilities and Respective Capabilities (CBDR-RC), enshrined in the UNFCCC and its Paris Agreement, as the basis for climate action. “India pushed for an explicit recognition that the goal of developed countries making available $100 Bn per annum through 2020  has not been achieved, is expected to be met no later than 2023”, he added.

He said that the G20 also emphasized the importance of maintaining undisrupted flows of energy from various sources, suppliers and routes. He spoke of the need for exploring paths to energy security and stability of energy markets.  The Minister said that language on recognizing the role of Coalition for disaster resilient infrastructure (CDRI) in accelerating the agenda of sustainable urban planning was also introduced.

Underscoring the achievement of the  G20 framework on base erosion and profit sharing, Shri Goyal said that it was a historic accomplishment for a more stable and fairer international tax system

The Minister said that the G20 had acknowledged the importance of shared standards for seamless travel including testing requirements & results, vaccination certificates & mutual recognition of digital applications. “G20 reaffirms the role of data for development”, he added.