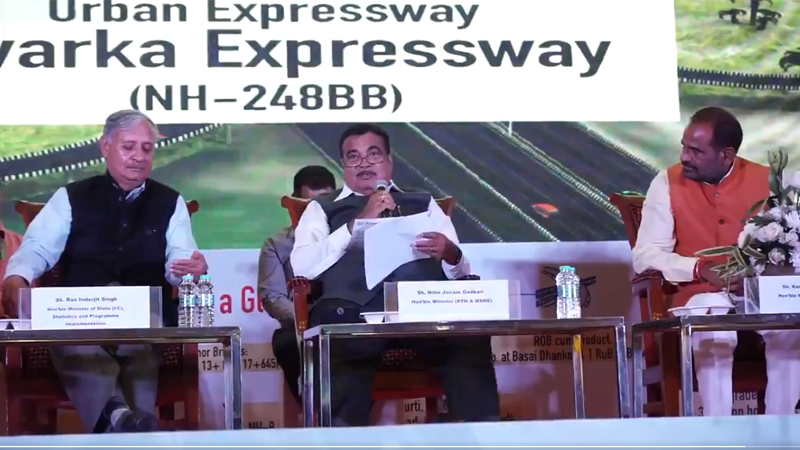 The Union Minister of Road Transport & Highways, Shri Nitin Gadkari reviewed the progress of India’s First Grade Separated Urban Expressway, Dwarka Expressway (NH – 248BB) today. The Minister made a inspectional visit to Dwarka Expressway with public representatives and Media. Shri Nitin Gadkari expressed hope that the 29-kilometre long Expressway, being constructed under the Bharatmala Project and with a cost of Rs.8,662 crore, would be completed before the Independence Day next year. The Minister said that “it will be the first-ever elevated Urban Expressway in India and will immensely help reducing the air pollution in Delhi-NCR”. While addressing media persons after the inspection of project, Shri Nitin Gadkari said that the Dwarka Expressway would also be the first instance of a project where Tree Plantation of approximately 12,000 trees has been undertaken, keeping protection of the environment in view. He further said that “based on this experience, the method will be replicated across the country”.

The Minister stated that Delhi-Gurugram section of National Highway-8, a part of Delhi-Jaipur-Ahmedabad-Mumbai arm of Golden Quadrilateral (GQ), is presently carrying traffic of over three lakh Passenger Car Units (PCUs), which is much beyond design capacity of this 8-lane highway, leading to severe congestion and with the construction of the present project, 50 to 60 per cent traffic on National Highway-8 will be reduced. The project will also provide around 50 thousand direct or indirect employment opportunities.

Being built in four packages, total length of the Expressway is 29 kilometres out of which 18.9 kilometre length falls in Haryana while remaining 10.1 kilometre length is in Delhi. It starts from Shiv-Murti on National Highway-8 and ends near KherkiDaula Toll Plaza.

The Minister said that the project, once complete, will be an engineering marvel of India as it has several unique features. This will have longest (3.6 kilometre) and widest (8 lane) Urban Road Tunnel in India. The project’s road network will also comprise of four levels, i.e., tunnel / underpass, at-grade road, elevated flyover and flyover above flyover.