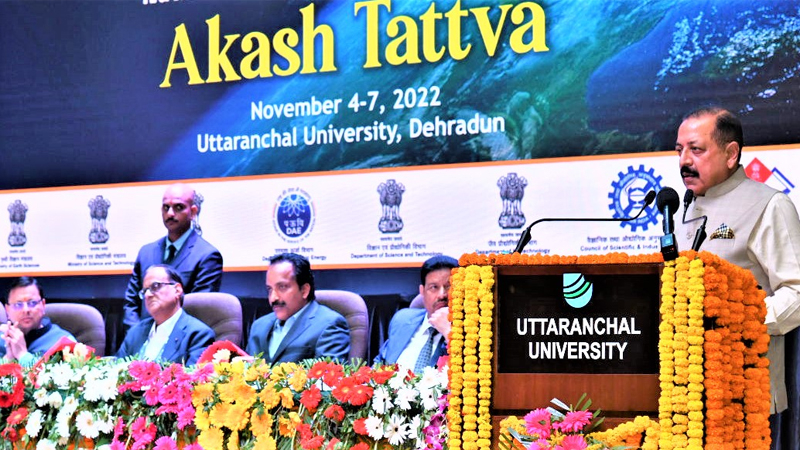 The Minister recalled that when he was a child, there was only radio and nobody had heard of a television but his teacher used to wishfully say that one day we might be able to see the face of the news-reader on the radio. Similarly, when Sarabhai started the Space programme, most of us in India sang nursery rhymes about the moon without ever imagining that one day Indian missions will land on the surface of the moon, he added.

Delivering the key-note address at the 4-day National Conference on Akash Tattva- “Akash for Life”at Uttaranchal University Campus in Dehradun, Dr Jitendra Singh said, Prime Minister Narendra Modi has enabled India to earn universal recognition for India’s science, technology, innovation capabilities and our StartUps are much sought after. The whole world is looking at India as an inspirational place, as it is helping budding countries in capacity building and satellite building including nanosatellites, he said.

The Minister said, all this has become possible due to constant support and encouragement of Prime Minister Modi for scientific pursuits in all aspects of life during the last over eight years. He also underlined that it will be Science, Technology and Innovations that will define India’s role in the next 25 years to make it a frontline scientific power in the world.

Dr Jitendra Singh said, India’s ascent to the world comity of Nations has begun and it will happen via Space Technology. He said, applications of Space Technology to different sectors like Railways, Highways, Agriculture, and Smart Cities brought ‘ease of living’ for common man. He said, after the historic decision of the unlocking of the Space Sector in June, 2020, everyone is witnessing a transformation in the sector by bringing in start-ups, incubating them in space technology and bringing great applications to develop rockets and satellites. More than 102 start-ups are working in Space sector today. Moreover, Geospatial guidelines have enabled schemes like SVAMITVA to survey all the over 6 lakh Indian villages, the Minister added.

Dr Jitendra Singh said, though India’s space aspirations are reflected in its missions to the Moon and Mars, the Gaganyaan, the country’s first human space mission will be a major milestone in India’s Space Odyssey. The Minister informed that unmanned Gaganyaan flight is scheduled by end 2023. Second unmanned flight will be by mid-2024 and the manned mission is planned by 2024.

Dwelling on the theme of Akash Tattva conclave, Dr Jitendra Singh said, this is a first of its kind event organized in India since Independence, where ancient wisdom is combined with Modern Research by striking an optimum balance to achieve the desired outcomes. The Minister lauded Bhaiyyaji Joshi for the brain behind Panchamahabhoot conclave on Aakash, Vaayu Jal, Prithvi and Agni.

Giving the example of the opening up of the Traditional Knowledge Digital Library (TKDL) database to users, besides patent offices in August this year as a new dawn for Indian traditional knowledge, Dr Jitendra Singh said, it will be linked with modern knowledge and provide value addition to common users. He said, it also underlines the fact that without getting swayed by the fanciful stories or romanticism of the past or the ancient times, how best one can extract what is relevant to modern times and this the crux of the Panchamahabhhoot-combining ancient wisdom with modern science.

Dr Jitendra Singh said, he is looking forward to new thoughts on various dimensions of Akash Tattva during the Dehradun Conclave as about 35 eminent speakers will share their perspectives in the three-day conclave. The Minister said, the main aim of the conclave is to expose the youth of India to the wisdoms of ancient science along with modern scientific advancements.

The campaign ‘Sumangalam’ is being organised across the country for finding the solutions to the environmental problems like global warming and climate with an Indian perspective. From the point of view of Indian traditional knowledge systems, five national conventions will be held across the country on the Panchmahabhoot – the five elements for solving environmental issues for the betterment of society. We all are aware that anchamahabhoota’s consist of Aakash, Vaayu Jal, Prithvi and Agni.