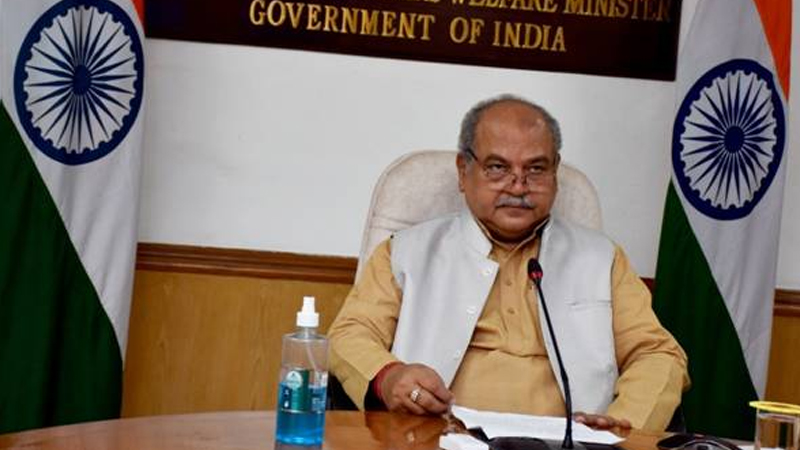 The Union Minister of Agriculture and Farmers Welfare, Shri Narendra Singh Tomar said that the government is committed to addressing various challenges faced by the agriculture sector including climate change. Due to severe climate imbalance, some regions are facing droughts while others are struggling to control floods. The Minister said the government is serious about such adverse climatic conditions and our scientists are also working very diligently to develop innovative seed varieties which are compatible with such climatic conditions. Shri Tomar said this while addressing the 16th sustainability summit 2021 of the Confederation of Indian Industry (CII) as the Chief Guest today.

Shri Tomar said that the Azadi Ka Amrit Mahotsav is being celebrated on the call of Prime Minister Shri Narendra Modi to mark the completion of 75 years of independence. During COVID crisis, India on its part has extended all possible support to other countries. He said the vaccination drive against Covronavirus is also going on in full swing in the country and 66 crore doses have been inoculated in the country so far.

The minister added that despite the Covid 19 pandemic, Indian Farmers with their hard work could achieve bumper production. India being an agricultural country, the contribution of the agriculture sector to the GDP has always been significant. Shri Tomar said that under the Pradhan Mantri Kisan Samman Nidhi, so far about 1,57,000 crore rupees have been deposited in the bank accounts of more than 11 crore farmers of the country.

The Minister said that the Prime Minister has launched the Production Linked Incentive (PLI) scheme, which will prove beneficial for other industries including food processing. In order to make agriculture profitable for small and medium farmers, infrastructure is being developed near the farms as part of the concrete steps of the government. In this regard, Agriculture Infrastructure Fund of Rs one lakh crore rupees has been created, through which projects are being sanctioned. Projects of more than Rs four thousand Crore have been approved. 10 thousand Farmer Producer Organizations (FPOs) will be formed in the country under the new scheme of the Center, the work of which has started. The scheme will provide better market to the farmers and enhance their income. It is a matter of pride for the country that we have cracked into the top ten list of agricultural produce exporters and we want to further enhance it. For the benefit of the farmers, the agriculture sector is being connected with state-of-the-art technology. Along with more than seventy Kisan Rail in the country, farmers are also being benefited through Udaan Yojana.

Shri Tomar said that the Central Government, which is committed for the upliftment of the farmers, has brought the Agriculture Reforms Act, which will bring about a radical change in the field of agriculture. With the new farm laws, the whole country will be an open market for the farmers. The private sector can also now invest in modern agri-business platforms, setting up post-harvest facilities like godowns-cold storage. This will pave the way for better facilities for the farmers at lower charges. It is very important for the development of agriculture sector. These reforms have created substantial investment opportunities and have tried to bridge the gaps. Shri Tomar said that India shares cordial relations with Denmark, it has been the constant endeavor of Prime Minister Shri Modi ji that both the countries share knowledge and technology of each other.