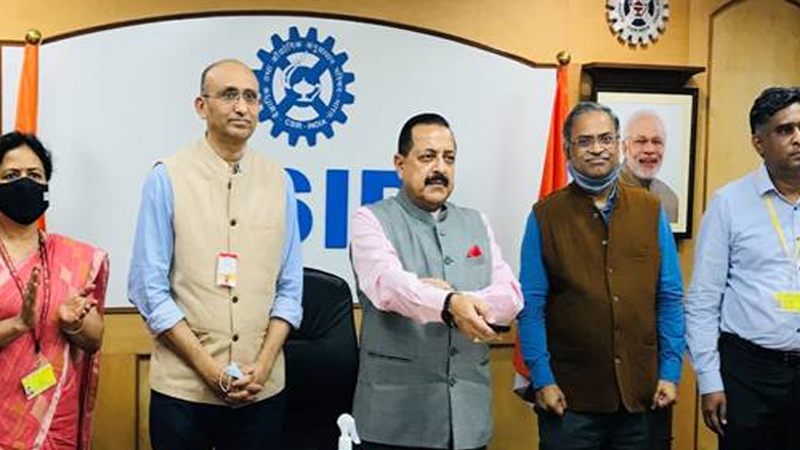 The Minister further said that the 75 Best Chosen Start-ups will be an asset for India to lead the country in the next 25 years, during the celebrations of Centenary of India’s Independence.

About NABI, Dr Jitendra Singh said, the facility has come up under the National Supercomputing Mission (NSM) in collaboration with C-DAC, Pune. The Minister said that this high-end facility will be a boon for the analysis of BIG DATA accruing from the large-scale genomics, functional genomics, structural genomics and population studies being carried out at various Institutes and universities of national and international repute.

Established with an approximate cost of Rs. 20 crores, The Minister said, this 650 teraflops supercomputing facility will be a unique in catering to the needs of the interdisciplinary cutting-edge research being carried out at the Institute related to Agricultural and Nutritional Biotechnology. He said, it will also be available for the scientists of NABI and Centre of Innovative and Applied Bioprocessing (CIAB) and will be open to collaborative work for the scientists/faculties working in the neighboring institutes/universities and for the projects sanctioned under NSM.

In another related event, Dr Jitendra Singh inaugurated i-RISE, Technology Business Incubator (TBI) at Mohali and said that it will provide world class research facilities for start-ups in the country. He said, with the formation of this Technology Business Incubator, city of Mohali will join the league of other Start-up hubs in the country like Bengaluru and Gurugram. The Minister hoped that TBI will become successful and end up becoming the Unicorn Start-up, adding to the ever-growing list of the Unicorn start-ups from India. Currently, India has 51 Unicorn Startups (3rd Highest in the world), he added. Dr Jitendra Singh said, due to various schemes, focus and support system provided by the Prime Minister Narendra Modi, 10,000 start-ups got registered in India in 2021 alone. He said, India now have 50,000 plus start-ups providing more than 2 lakh jobs in the country.

Dr Jitendra Singh said that supported by Department of Science and Technology and Indian Institute of Science Education and Research, IISER Mohali, i-RISE Incubator will work to transform and build deep impact across the start-up ecosystem in the region, through innovation, knowledge and technology adoption. The Minister added that DST has always taken lead in providing the support to the science and technology-based innovations in the country and these Technology Business Incubators aim to nurture start-ups through scouting, supporting and scaling of innovations.

Dr Jitendra Singh informed that in the last over 7 years of the Modi Government, India has been consistently rising in the global start-up ecosystem and now it has 500 plus incubators network supporting innovation and entrepreneurship across the nation. He said that in terms of the number of technology based Start-Ups, the ranking of India is just next to US and India has jumped to 46th rank in the Global Innovation Index.