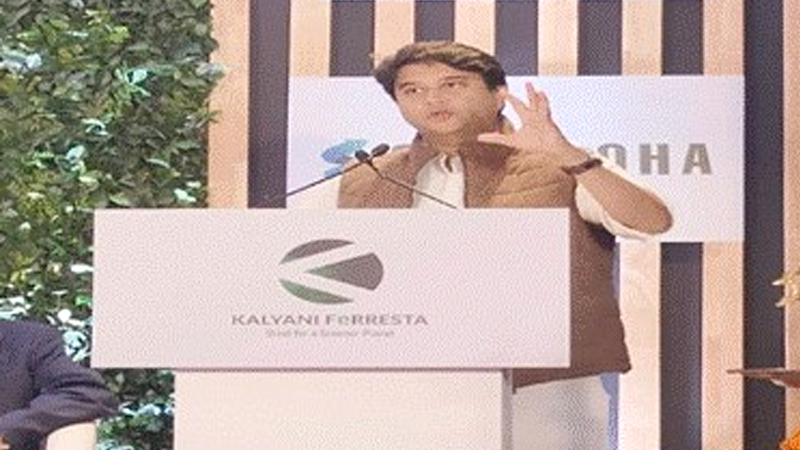 The Union Minister of Steel and Civil Aviation, Shri Jyotiraditya M. Scindia on Tuesday urged the Indian steel industry to move towards green and low carbon emitting production processes. Speaking at the launch of Kalyani Group’s first green steel brand ‘Kalyani FeRRESTA’ in New Delhi on Tuesday, the hon’ble minister emphasized on the growing role of steel as the foundational force for the development of a nation.

Minister Scindia added that as the fifth largest economy and second largest producer of steel, India needs to also become a responsible and sustainable producer of steel. Talking about the enhanced consumption and production capacities of the nation, the minister said that “We have ambitious expansion plans of doubling our production capacity by 2030 from the current level of 154 MT to 300 MT, as also envisaged in National Steel Policy 2017”. He said that therefore there is a need to strike a balance between Steel Industry’s ambitious capacity enhancement targets and work towards Prime Minister Narendra Modi’s vision of achieving net zero target by 2070.

He also shared that through strategic policy interventions, the government has resolved to bring down carbon emissions by 2030 and strengthen the country’s commitment towards producing green steel. He said that the government and other stakeholders need to work together to decarbonise the industry by ensuring increased use of renewable energy, efficient raw materials like scrap and pellets, best available technologies and green hydrogen. He added that together the industry needs to move from fossil fuel intensive BF-BOF (Blast Furnace – Basic Oxygen Furnace) route and Coal-based DRI-EAF/IF (Direct Reduced Iron-Electric Arc Furnace/Induction Furnace) to gas-based DRI-EAF to ensure a successful transition to green steel.

The Minister also talked about mandating steel producers of the nation to dedicate a percentage of their production to making green steel and ensuring greater usage and promotion of the same in government projects.

The occasion was graced by the presence of Additional Secretary, Ministry of Steel, Ms. Ruchika Chaudhry Govil and other senior dignitaries of the Ministry and the fraternity.