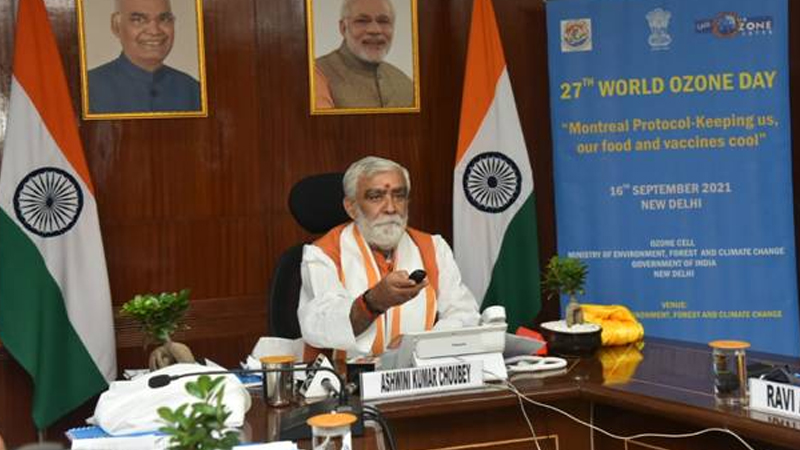 The Minister of State for Environment, Forest and Climate Change Shri Ashwini Kumar Choubey today said that India has successfully phased-out production and consumption of several major Ozone Depleting Substances (ODS) and met all the obligations of the Montreal Protocol so far, by accessing technical and financial assistance from the financial mechanism of the Montreal Protocol.

The Minister was chairing an event organized to observe the 27th Global Ozone Day in New Delhi today.

Shri Chowbey said, one of the reasons to India’s success in phasing out of the Ozone Depleting Substances is the involvement of key stakeholders both at the planning as well as implementation levels. He said, Industries, research institutions, line Ministries, consumers etc. have been contributing significantly to the Ozone Depleting Substances phase out programme of the Montreal Protocol in India.

Referring to the Kigali Amendment to the Montreal Protocol, which was recently ratified by the Government of India, the Minister said, issues relating to minimizing industrial obsolescence and adverse economic impacts should appropriately be addressed while developing a Hydrofluorocarbon phase down strategy for implementing it.

World Ozone Day is celebrated on 16th September each year to commemorate the signing of the Montreal Protocol, an international environmental treaty for phasing out of production and consumption of Ozone Depleting Substances, that came into force on this day in 1987. The Day is celebrated every year to spread awareness among people about the depletion of Ozone Layer and the measures taken/ to be taken to preserve it.  The Ozone Cell, Ministry of Environment, Forest and Climate Change (MoEF&CC), Government of India has been celebrating the World Ozone Day since 1995 at the National and State levels.

The theme World Ozone Day 2021 is “Montreal Protocol – Keeping us, our food and vaccines cool”.

MoS Shri Choubey released the Action Plan for implementing recommendations of the India Cooling Action Plan (ICAP) for the thematic Area Space Cooling in Buildings. The Action Plan has been developed after mapping of the recommendations given in the ICAP and after detailed discussions with various stakeholders including line departments and Ministries.

The India cooling action plan (ICAP), the first of its kind in the world to be developed by the MoEF&CC, addresses cooling requirement across sectors and lists out actions which can help reduce the cooling demand through synergies in actions for securing both environmental and socio-economic benefits. The ICAP aims to reduce both direct and indirect emissions.

He also released the Winning Entries of Poster and Slogan Competitions held on the occasion across various schools in India. More than 3900 Students participated in the competition.

During the on-going HCFC phase out Implementation, as a part of the long-term vison,  India has consciously chosen a path for environment friendly and energy efficient technologies India, as  one of the first amongst developing countries,  has been able to achieve the complete phase out of HCFC 141b, one of most potent ozone depleting chemicals used as a blowing agent in manufacturing of rigid foam.

Preparation of Hydrochlorofluorocarbons Phase out Management Plan (HPMP) Stage-III will be commenced shortly, which shall address phase out of use of HCFC-22, a refrigerant used in Refrigeration and Air-conditioning manufacturing and the servicing sectors.

Adequate attention has also been given to synergize the Refrigeration and Air-conditioning servicing sector training under the Hydrochlorofluorocarbons Phase out Management Plan (HPMP) with the Skill India Mission of the Government of India, to multiply the impact of skilling and training. The skilling and certification of service technicians will not only significant environmental benefits, but also have a positive influence on their livelihoods.

The Kigali Amendment to the Montreal Protocol, finalized by the Parties during 2016, shall gradually reduce the consumption and production of hydrofluorocarbons (HFCs), introduced as non-ozone depleting alternative to Hydrochlorofluorocarbons (HCFCs), which have high global warming potential ranging from 12 to 14000.

Government of India has recently decided to Ratify the Kigali Amendment to the Montreal Protocol, once again demonstrating to the global community, India’s commitment towards protection of climate and the environment.  The Ministry will be working towards developing a National strategy for phase down of Hydrofluorocarbons, after required consultation with all the industry stakeholders.  Implementation of Hydrofluorocarbons phase down under the Kigali Amendment through the adoption of low-global warming potential and energy-efficient technologies will achieve energy efficiency gains and carbon dioxide emissions reduction – a “climate co-benefit.”  In addition, synergies with on-going government programmes and schemes of the Government of India will be promoted with the objective to maximize the economic and social co-benefits, besides environmental gains.

Energy efficiency is a major driver for technology choice under the Kigali Amendment. India has been actively pursuing in the Montreal protocol meetings to incentivize energy efficiency in use of new refrigerants and technology under the Hydrofluorocarbons phase down. There is a need to build facilitative frameworks, strengthen institutional capacity and design effective implementation models to move towards enhancing energy efficiency of equipment while lowering global warming potential of refrigerants.

The initiative of the Ministry of Environment, Forest and Climate Change (MOEF&CC) to develop an India Cooling Action Plan (ICAP), the first of its kind in the world, is to look for synergies in actions having the potential to provide socio-economic and environmental benefits related to reduced refrigerant use, climate change mitigation and Sustainable Development Goals.  The India Cooling Action Plan (ICAP) recommends synergies with ongoing government programmes and schemes such as housing for all, the Smart Cities Mission, Doubling Farmers Income and Skill India Mission, to maximize socio-economic co-benefits. The Ministry has taken steps to operationalize the recommendations given in India Cooling Action Plan (ICAP) along with concerned line Ministries and Government Organizations, Industry and think tanks and Academia.  Space cooling in buildings has been addressed on priority in implementation of the recommendations and the Ministry has come out with  action points relating to implementation of the recommendations.

World Ozone Day reminds us that not only is ozone crucial for life on Earth, but that we must continue to protect the ozone layer for future generations.