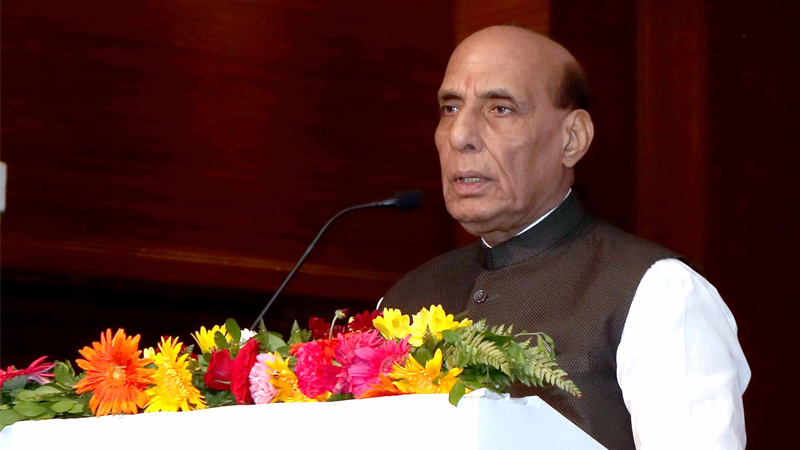 Raksha Mantri Shri Rajnath Singh has reaffirmed India’s resolve for open, free and rule-based maritime borders in the Indo-Pacific region. He was delivering the inaugural address at 18th Heads of  Asian Coast Guard Agencies Meeting (HACGAM) in New Delhi on October 15, 2022. The Raksha Mantri asserted that India, throughout history, has been a peace loving society which has never invaded a foreign land and has always respected universal human values & territorial integrity of other countries, while treating them as equal partners. He stressed that oceanic space should be respected as a global common for the benefit of all humanity in an environmentally sustainable way.

“We stand for open, free, rule-based maritime borders in Indo-pacific, in which no nation, how-so-ever big, may be allowed to appropriate the global common or exclude others from its fair use. We are always ready and forthcoming to work with all the like-minded partner countries across various forums towards this endeavor,” Shri Rajnath Singh said.

The Raksha Mantri stressed that India’s shared vision of ‘SAGAR’ (Security and Growth of All in Region), Sustainable Development Goals and ‘Rule Based Order at Sea’ complement the focused Indian approach of inclusive growth and lasting collaboration in the Indo-Pacific region. He highlighted India‘s focus towards blue economy and strongly advocated the sustainable use of ocean resources for economic growth, improved livelihoods and jobs and preserving the health of ocean ecosystem.

Shri Rajnath Singh voiced India‘s commitment to implement international regulations; enact legislations for maritime safety and security; establish cooperative mechanism with nations and engage in capacity building of maritime law enforcement agencies. He emphasised that India is also encouraged by the effectiveness of agreements like Regional Cooperation Agreement for Combating Piracy and Armed Robbery Against Ships in Asia and considers mutual cooperation alone as the most effective way for ensuring safety and security at sea. He called to spare no efforts while promoting such cooperative mechanisms.

The Raksha Mantri called for effective collaboration among maritime nations to deal with challenges to maritime safety. “With continued growth in marine traffic, the potential risk of marine pollution and requirement of Search and Rescue consequent to any unwanted maritime incidents have also grown manifolds. The recent oil spill incidents have raised concerns about maritime environmental and the attendant life hazards. Illegal Unreported and Unregulated (IUU) fishing continues to threaten long term ocean sustainability. Smuggling, drug trafficking and human trafficking through ocean routes has made maritime law enforcement more challenging. Successful response strategy against threats is the need of the hour, he said.

Shri Rajnath Singh appreciated the role of Coast Guard Agencies in ensuring maritime safety and security. He stated that as maritime policing and law enforcement agencies, Coast Guard Agencies bring a distinctive capability and functionality on the table. He called upon the agencies to complement the capacities of respective national navies and together ensure a safe and secure maritime environment. Asserting that greater synergy in operations, sharing of domain expertise and seamless operational integration will ensure continuous maritime law enforcement in the region, he hoped that together the maritime domain can be made conducive by ensuring safe and secure maritime environment and cleaner seas.

Indian Coast Guard (ICG) is hosting 18th HACGAM in coordination with HACGAM secretariat from October 14-18, 2022. A total of 55 representatives from 18 countries and two International Organisations – Regional Cooperation Agreement on Combating Piracy and Armed Robbery against Ships in Asia Information Sharing Centre (ReCAAP ISC) & United Nations Office on Drugs & Crime- Global Maritime Crime Programme (UNODC-GMCP) – are participating in the meeting. During the four-day event, working-level discussions and high-level deliberations on issues of maritime prominence in the domain of marine environment protection, maritime search and rescue and maritime law enforcement will be held. Additionally, a joint statement encompassing the key outcomes of this congregation of Heads of Asian Coast Guard will be released which will act as roadmap for this multilateral forum to plan and conduct various collaborative initiatives till next HACGAM.