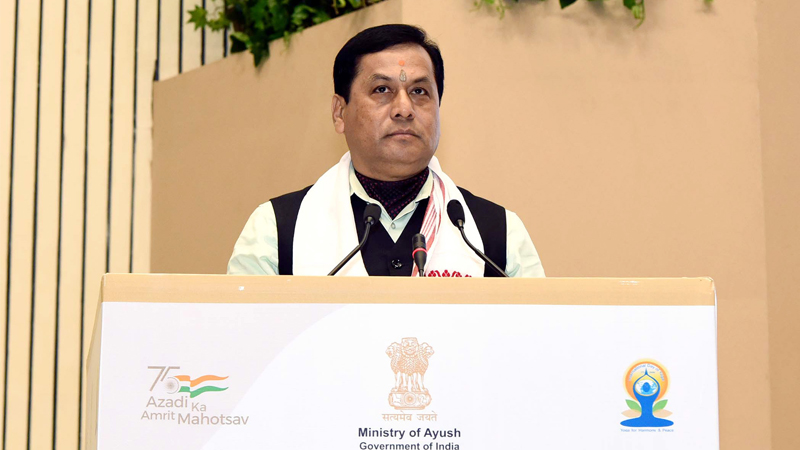 This year the International Day of Yoga 2022 campaign will focus on the theme 100 days, 100 cities and 100 organizations till 21st June, 2022 across the globe. For the first time to celebrate Azadi ka Amrut Mahotsav, it will demonstrate Yoga at 75 Heritage Heritage/Iconic cultural sites on 21st June, 2022. Other program includes Yoga programs, Yoga demonstrations, workshops, seminar to be held not only in India but across the globe. Ministry will propagate benefits of using WHO mYoga App, Namastey App, Y-break App. Various people centric activities and programmes will be launched on MyGov platform including Photo contest, quiz, discussion, pledge, poll survey, jingle etc.

In his inaugural address Shri Sarbananda Sonowal said that IDY 2022 will be the 8th edition of International Day of Yoga organised by us. It’s an opportunity for a mass movement to promote health, wellbeing and peace across the globe. It is worth mentioning that 100-day countdown will formally mark the beginning of journey towards celebration of IDY-2022, which will be journey towards freedom from disease, stress and depression. The Minister  said that as WHO’s Global Centre for Traditional Medicine is being established in India, it has incumbent upon India, which is equipped with deep wisdom of yoga and traditional health practices, to lead the world on the path of peace, well-being, better and affordable health.

He added that Under the leadership of our Prime Minister, since 2015 it has become a mass movement and has been recognized as biggest public initiative in the world – more than 250 million people are practicing common yoga protocol developed by Ministry of Ayush. My ministry has taken initiatives to make yoga an Indian brand for world peace and also to promote motto of promote motto of “Ek Bharat Shreshth Bharat”.

On this occasion, Chief Minister of Haryana Shri Manohar Lal Khattar said that Haryana is first state in India to establish Yoga Commission. We are in process of establishment an Ayush University in kurukshetra, Haryana in 100 acre area. We have also taken initiative to make it mandatory to make available an Ayush Doctor in almost 2000 Public Health Center of Haryana.

Shri Prem Singh Tamang, Chief Minister of Sikkim proposed to establish National Yoga and Meditation Institute at near Kritunga Lake in Sikkim. It will be a global institution which will impart knowledge about the yoga. He added that Yoga is part of the school curriculum of Sikkim and around 500 teachers are imparting these services.

In his Address, Shri Bhupender Yadav said that on the path of environment friendly lifestyle, Yoga and Ayush as a whole, have a lot to contribute We are amending the Bio-diversity Act which will have lasting impact on the advancement of Ayush systems. He requested Ayush Minister to also organise Yoga programmes during this countdown series at prized sites like 49 select lakes and 52 tiger reserves.

Vaidya Rajesh Kotecha, Secretary, Ministry of Ayush  citing an example of the utility of Yoga in the current scenario, said that AIIMS Delhi did a project to see the efficacy of Yoga in holistic health. AIIMS studied the impact of Yoga in comparison with Gym goers. The physical improvement in both the groups were almost same but whereas Gym goers were seen to have enhanced ‘Rajo-gun’ and ‘Tamo-gun’, the yoga practicing group was seen to have enhanced ‘Sato-gun’.