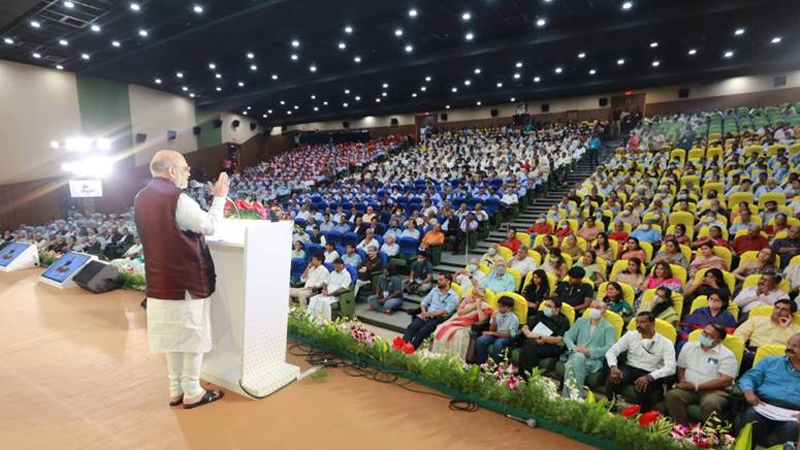 Honorable Home Minister Amit Shah today appealed to the Tamil Nadu government to introduce Tamil as the medium of instruction in medical and technical education in the state. Attending the platinum jubilee celebration of India Cements in Tamil Nadu he said,”I appeal to the Tamil Nadu government to introduce Tamil as the medium of instruction  in medical and technical  education. A number of state governments have made this effort and students have started deriving  educational  benefits out of it.”

The Honorable Minister further  added that introducing Tamil as the mother tongue would help students  understand the Tamil medium  their lessons  better and will help them in attaining  higher education and conducting further research  in their subjects with their mother tongue as the medium  of instruction.

He said that Tamil is one of the oldest languages in the world. Preserving and promoting Tamil language  is the responsibility of the entire nation. He further revealed  that it was advised to introduce  Tamil as a medium of instruction in 1350 seats. But he said that as per latest data only in 50 seats, Tamil is used as the medium of instruction.

“If the Tamil Nadu government makes the move to provide medical and technical education in Tamil language, it will in itself be considered as  a great  service  to the promotion  of the language,” he stated. In the same program he announced that India will become a 5 trillion-dollar economy by 2025. “In the last eight years, India has achieved the feat of becoming the 5th largest economy from the 11th rank it held earlier, leaving Britain behind. Even a recent study conducted by Morgan Stanley predicts that no one can stop the Indian economy from holding the 3rd rank in the world by 2027,” the home minister said at the august gathering.

Reiterating the pivotal role the infrastructure sector has to play in achieving this success, he said that the Government of India has introduced a number of effective policies to make it possible.

“Be it in the space sector, drone sector, or making India the hub of defense manufacturing, Prime Minister Narendra Modi has brought about major changes in the existing policies,” he added.

The Honorable Home Minister also asserted that the  Prime Minister has given the biggest opportunity to Tamil Nadu to attract investment in the defense sector by introducing the Tamil Nadu defense industry corridor which connects Chennai, Tiruchirapalli, Coimbatore, Salem, and Hosur.

“Be it making policies for the coal sector, the commercial mining sector, for start-ups or for pushing the banking sector ahead-the Narendra Modi government has introduced a slew of effective and transparent policies,” he said.

Reiterating that to strengthen research and development the Modi government has introduced new policies in different sectors, he said “I will give only one example here-when the entire world was battling the pandemic of the century, India was one among the few countries that produced its own vaccine. Not only that, till now India has administered 225 crore doses and has helped 85 countries to move out of the crisis by sending vaccines to them.”

He also said that due to the poverty alleviation programs of the Modi government more than 60 crore people in India have started contributing to the economy.

“Earlier they were so entangled in fighting their day-to-day battle in poverty that they could hardly think of contributing to the economy. But the Narendra Modi government has given every such household toilet facility, power connection, homes, gas connection and even health expenditure up to 5 lakhs is provided by the government today,” he said

He further added that on account of these facilities the living standard of this population of 60 crore people has seen an upward push. Now they have started contributing to the economy with new aspirations.

“I think these moves have themselves given a big boost to the economy by igniting hopes among these 60-crore people.”

He also stated that due to political stability and transparent governance, India has become a fast-paced economy today.

” The achievements of India are today acknowledged by the entire world. The IMF has labeled India as a bright spot in a dark zone,” he said.

Stating the achievements  of India he said that the Government of India has focused on expenditure and in the year 2022-23 it increased capital expenditure by 46.8% than the last year and the GST collection in October 2022 was 1,51,718 crores which is the second biggest collection till now.

He stated that in the same month the number of UPI transactions in India stood at 12.11 lakh  crore and 21 lakh vehicles have been sold which is 7 lakh vehicles more than the last year.

Explaining the government’s special focus on Tamil Nadu he said,”Narendra Modi government has focused with immense attention for the development of Tamil nadu priority sector.When there was a UPA government in the nation from 2009 to 2014, Tamil Nadu got Rs. 62,000 crores as tax devolution. But now it is 1,19,455 crores,  which is a 91% increase .Grant in aid to the southern state during UPA period was 35000 crores  which increased to Rs. 95734 crores during Narendra Modi regime, which is a clean 171% growth.