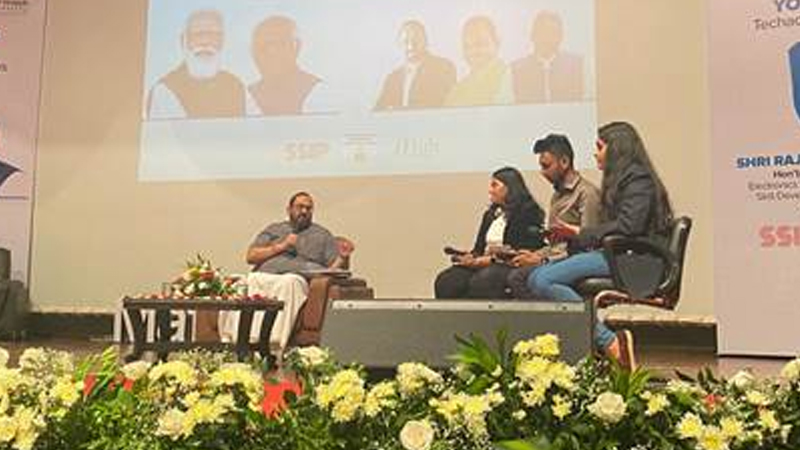 Driven by the Prime Minister, Shri Narendra Modi’s proactive policies and the launch of 5G services in India, Minister of State for Electronics & Information Technology and Skill Development & Entrepreneurship, Shri Rajeev Chandrasekhar, in Rajkot, Gujarat today, said that India will soon emerge as a leader in Electronics Manufacturing in the world with its youth playing a big role in this effort.

“Prime Minister, Shri Modi’s vision of India’s Techade can be realised by our young Indians through their hard work, determination and enterprise. The Government on its part can only be the enabler with its initiatives like the Digital India, Skill India etc,” said Shri Chandrasekhar addressing students of the Saurashtra University and Atmiya University in Rajkot.

Emphasising that the Government’s strategy was to encourage the “deepening and broadening” of the electronics space through investments in semiconductors, AI, machine learning, blockchain etc., the Minister said, “For this purpose, the Government was ready to give grant up to Rs 100 crore for investment in semi-conductor designs.”

Stating that he will soon embarking on roadshows in different parts of the country to encourage entrepreneurs to grab the opportunities, Shri Chandrasekhar said our strategy is to cut down on imports and aim to become a value creator to the supply and value chains and not just being a commodity exporter. 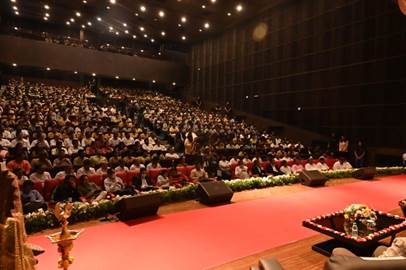 Referring to Gujarat’s initiative in the electronics sector, Shri Chandrasekhar said that the State has taken several proactive measures like announcing its own Semicon policy and establishing Dholera as Asia’s largest electronics hub. “Dholera will bring along a lot of opportunities for entrepreneurs of the State.”

Talking about how PM Shri Modi’s government has demolished old narratives about India as a dysfunctional, corrupt and low-growth economy, that favoured only the influential and the well-networked, the Minister said that there is democratisation of opportunity and democratisation of capital in today’s India. “We follow the dictum – maximum governance and minimum government”

“Prime Minister, Shri Narendra Modi is building a New India for Young India with reimagined ambitions so that we can achieve our target of One Trillion USD Digital economy/ 5T USD Economy and also emerge as a trusted partner in technology. He does not believe in revdi economics or freebies culture as populated by some Opposition parties,” he emphasised.

Shri Chandrasekhar also met several young startups and entrepreneurs at the Marwari University and discussed with them their apps/innovations and how those could be escalated into marketable products.

Later he attended a meeting with industry leaders and other district officials, organized by CII. The Minister urged them to consider how Industry and Academia and the Government can together support incubated startups in commercialising their innovations. He also asked industry leaders as well as District administration officials to contribute towards framing District Skill Development Programme by mapping local aspirations.

The Minister who was on a two-day official tour of Rajkot and Surendranagar, since yesterday, met students, entrepreneurs, startups, leaders from the industry, academia and other eminent personalities and shared PM Shri Narendra Modi’s vision for empowering all Indians – Sabka Saath Sabka Vikas.