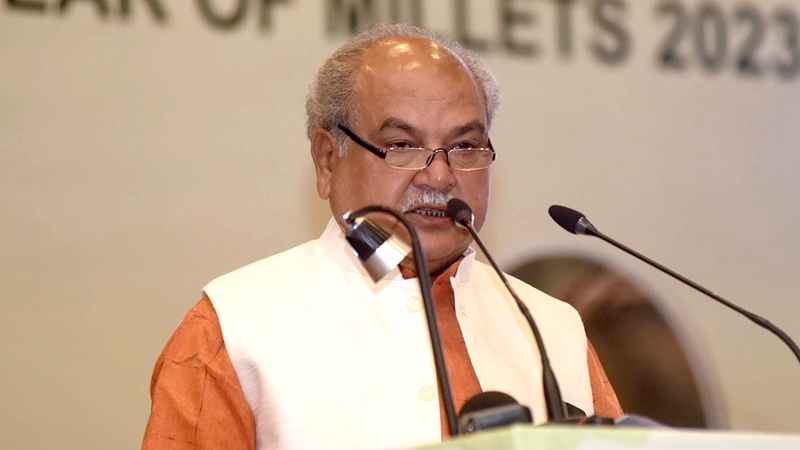 The Union Agriculture and Farmers Welfare Minister Shri Narendra Singh Tomar has said the International Year of Millets (IYOM) – 2023 will provide an opportunity to increase global production, efficient processing and better use of crop rotation and promote millets as a major component of the food basket. Shri Tomar said that on the initiative of Prime Minister Shri Narendra Modi, the United Nations has declared the year 2023 as the International Year of Millet (IYOM).

“Through this, our aim is to increase the domestic and global consumption of Millets,” said Shri Tomar, addressing the High Commissioners/Ambassadors based in Delhi during the Luncheon hosted jointly by the Department of Agriculture and Farmers Welfare and Ministry of External Affairs as a pre-launch celebration of the IYOM23. Shri Tomar said the Ministry of Agriculture and Farmers Welfare is working in mission mode to increase millet production and consumption in collaboration with other Central Ministries, all State Governments and other stakeholder organizations.

“The time has come for the Public Distribution System to shift the focus of distribution programs from basic calories to provide a more diverse food basket that includes millets to improve the nutritional status of pre-school children and women of reproductive age,” he said.

Considering the nutritional value of millets, Shri Tomar said the Government of India had notified millet as a nutritious -cereal in April-2018 and millet has also been included under the Poshan Mission campaign. 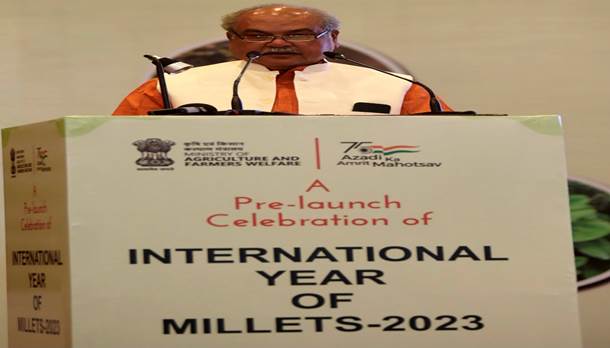 Under the National Food Security Mission (NFMS), nutritious cereal component for Millets is being implemented in 212 districts of 14 States. Apart from this, many types of assistance is given to the farmers by the states.

Shri Tomar said funding is also being done by the Ministry of Agriculture for supporting sustainable production, creating awareness for higher consumption, developing market and value chain and research-development activities.

The Union Agriculture Minister said more than 66 Startups have been given more than Rs.6.25 crore, while 25 Startups have been approved for further funding. “Government is providing support to Start-up entrepreneurs for recipes and value-added products to promote consumption of millet,” he said.

India has more than 500 startups working in the millet value-added chain, while Indian Institute of Millets Research has incubated 250 startups under RKVY-Raftar.

Shri Tomar said the NITI Aayog and the World Food Program intend to identify and solve the challenges in a systematic and effective manner. “The partnership will focus on mainstreaming millets and support India in taking the lead globally in knowledge exchange using the opportunities in the form of the International Year of Millets,” he said.

Addressing the High Commissioners/Ambassadors based in Delhi, Minister of External Affairs, Shri S. Jaishankar said, Millets have increasing relevance in the world today in the backdrop of COVID, climate change, and conflicts. 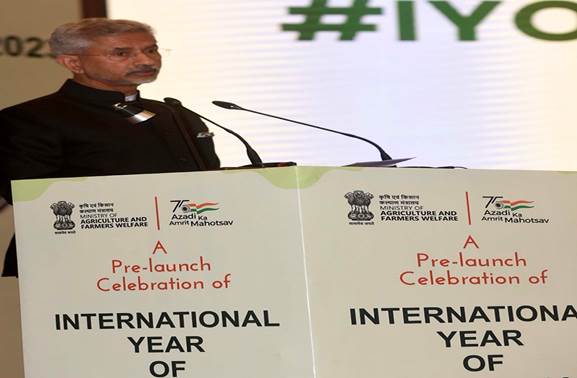 In his address, Secretary, Agriculture and Farmers Welfare Shri Manoj Ahuja said, pandemic has brough increased focus on the needs to augment the income of small and marginal farmers and millet can be one of the best options for the same. He said, climate friendly crop millet can be grown with less water consumption, less carbon emission and even in drought.

Millet is a storehouse of micronutrients, vitamins and minerals. International Year of Millets will raise awareness about the contribution of millets for Food Security and Nutrition, motivate stakeholders for continuous production and quality improvement of millets and attract attention to increase investment in research and development services.

Jowar and Proso Millets (Common Millet) are the most cultivated millets in the 112 and 35 countries respectively. Sorghum and pearl millets covers more than 90% area and production. Remaining production comes from Ragi (Finger Millets), Cheena (Proso Millets), Foxtail Millets (Kangni) and other non-segregated millets.

India is the major production country of Millet in which Kangni, Kutki or small millet, Kodon, Gangora or Barnyard, china and Brown top are included with Jowar, Bajra, Ragi and small millets. Most of the states in India grow one or more millet crop species. During the last 5 years, our country produced more than 13.71 to 18 million tonnes of millets with the highest production in 2020-21. 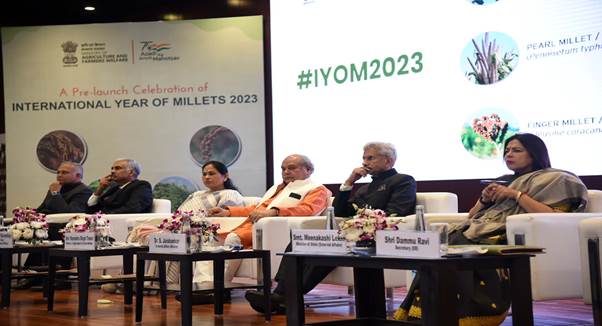 Millets provide an alternative food system in times of increasing demand for vegetarian foods. Millets contribute to a balanced diet as well as a safe environment. These are the gifts of nature to mankind.

The Ministry of Agriculture & Farmers Welfare has taken several initiatives to promote domestic and international millets. A series of pre-launch programs and initiatives were also organized on the MyGov platform for the International Year of Millet 2023 to create awareness and a sense of public participation about this ancient nutritious grain (millet). MyGov has become a very important and successful medium for raising awareness through contests.

Minister of State for External Affairs Smt. Meenakashi Lekhi, Secretary (Economic Relations) Dammu Ravi, Secretary, West, Shri Sanjay Verma and about 100 High Commissioners/Ambassadors based in Delhi and senior officials of both the Ministry took part in the event.