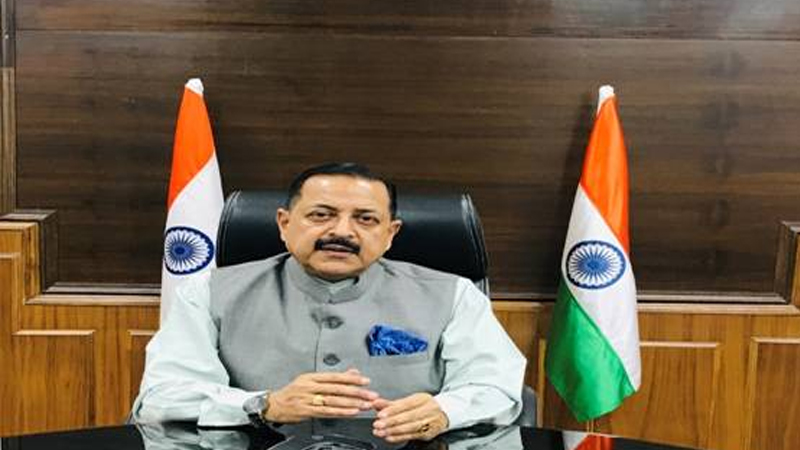 Union Minister of State (Independent Charge) Development of North Eastern Region (DoNER), MoS PMO, Personnel, Public Grievances, Pensions, Atomic Energy and Space, Dr Jitendra Singh today said that India’s vaccination drive is unmatched in its scale and despite a large population of over 135 crore and heterogeneous character of the country, the vaccination drive is proceeding smoothly. In Jammu & Kashmir alone, around 66% population above the age of 45 years have received the first dose of vaccine, he said.

In an exclusive interview to Sansad/Rajya Sabha TV, Dr Jitendra Singh said, India was the quickest to administer 100 million doses of vaccine and fastest to begin vaccinating those above the age of 18. He said, instead of politicising the issue, we should all collaborate to make India’s vaccination drive a mass movement.

The initial hesitancy or apprehension about taking the vaccine, said Dr Jitendra Singh, has also been overcome. In every part of the country today, all the eligible age groups are turning out in huge numbers for inoculation. He said, the second wave of the pandemic has further reiterated the need to receive vaccines for all eligible persons.

Responding to a question about the recent surge of COVID in Jammu & Kashmir, Dr Jitendra Singh said, from the end of April and beginning of May, entire Jammu & Kashmir particularly Jammu District has shown increased positivity rate and increased mortality rate. It became a matter of concern for the administration and also caused apprehensions in the society. However, he said, over the last one week, there has been a downward trend in these parameters and positivity rate.

Dr Jitendra Singh said, the mortality rate in Jammu & Kashmir peaked around 17th of May, but is now showing progressive decline. Another heartening feature, he said, is that around 66% persons above the age of 45 years have received the first dose of vaccine in the Union Territory.

Referring to reports about the Northeast turning into a hot spot, Dr Jitendra Singh said, there is no doubt that in recent times, the North Eastern States, which had remained unaffected in the first wave, have shown a steep rise in Covid positive cases. But the preparedness and the infrastructural capability is in place, with satisfactory handling of the situation and tremendous amount of confidence is there among the general public.

Dr Jitendra Singh also referred to the support by Japan and UNDP who have come forward to set up 8 Oxygen Plants in different parts of Northeastern regions. Meanwhile, he said, over 71 lakh persons have already been vaccinated in the North Eastern region with the maximum number being from Assam.