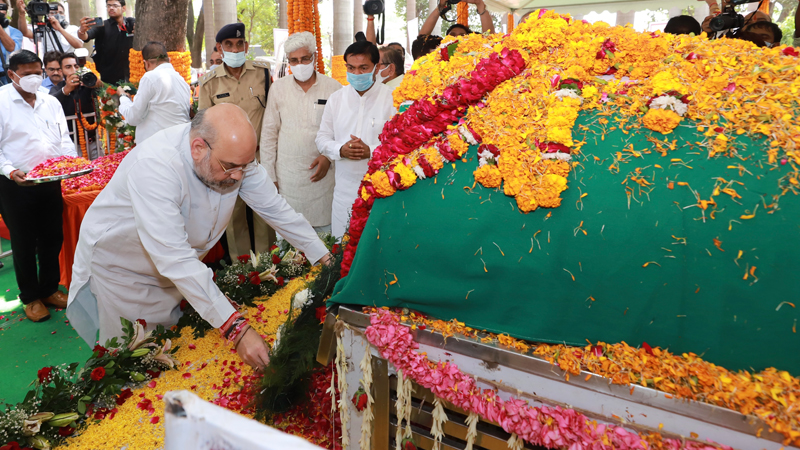 Union Home Minister, Shri Amit Shah paid his last respects today to the former Chief Minister of Uttar Pradesh, Shri Kalyan Singh at Atrauli. Shri Amit Shah said that the demise of Shri Kalyan Singh is a big loss to his party. In his death, our party has lost its luminary leader who possessed a fighting spirit and the poor and deprived, especially from Uttar Pradesh, have also lost a well wisher.

Union Home Minister said that that Shri Kalyan Singh was an important leader in the Shri RamJanmabhoomi movement and he did not think even once before sacrificing power for this movement. Shri Amit Shah said that at the time of the foundation stone laying ceremony of Shri Ramjanmabhoomi, he had spoken to Babu Ji and he was very happy satisfied and had said that his life’s aim has been achieved.

His life was dedicated to the development of Uttar Pradesh and the welfare of the poor and he always worked tirelessly to make it the best state in the country. Shri Shah said that Shri Kalyan Singh’s rise as an important leader, coming from a very humble background, always fighting for the aims of the ideology, keeping himself dedicated to the poor and backward sections of the society, will always remain inspirational for our party workers.

The Union Home Minister said that Babu ji’s demise has left a big void in the country’s political sphere, especially in our party, and it will be very tough to fill it for a long time to come. Shri Amit Shah said that despite not being active in politics for a long time, the crowds that have gathered to pay their tributes to Babu ji, especially the youth, show that his life left an indelible impression on the public life of Uttar Pradesh.

Shri Amit Shah said  all workers of our party pay their sincere respects to Babu ji and we will always keep working for the welfare of the  poor and the deprived in Uttar Pradesh. Shri Amit Shah prayed that may the soul of Shri Kalyan Singh rest in peace and his life become a source of inspiration for party workers for many generations to come.